This was more than just a win – one of Spain’s most popular golfers, Miguel Angel Jimenez, joined another great, the late Seve Ballesteros, when he won the British Senior Open on Sunday.

It made Jimenez and Ballesteros the only two Spaniards to have won at the Home of Golf, St Andrews. 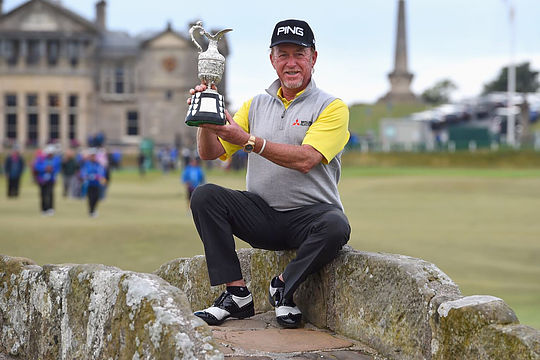 Seve, of course, won the British Open there with a stunning victory in 1984.

Jimenez, also one of golf’s greatest showmen, was almost as impressive with his Seniors major win there, posting a final-round 69 to finish on 12-under-par and win by a shot from defending champion Bernhard Langer.

Since turning 50 in 2014 Jimenez has now won six Seniors Tour events with his last two victories being Majors after capturing the Regions Traditions in the US in May and now the Senior Open.

Jimenez, 54, began the final round enjoying a two-shot lead at nine-under par and after the fourth birdie of his round at the 12th he led by three but then that was cut back to two shots when he bogeyed the 15th ahead of ending with three pars.

Jimenez was aged just 20 when Seve triumphed in 1984 and was just a few months into 15-months of mandatory service in the Spanish Army…but he now finds himself alongside Seve as a winner at the Home of Golf.

“This is one of my biggest victories and it is amazing to win here,” he said.

“This is my second major of the year, and it’s amazing to be the winner of The Open here at St. Andrews the Home of Golf.”

“Seve’s been my real inspiration through the years, with what he did.”

“This week, especially the first two rounds when I played with Tom Watson and Bernhard Langer, both of them, the way they were striking the ball, and it was amazing to play with them.”

“I didn’t play too well over the last few holes…I didn’t hit many solid shots.”

“At that stage I was feeling the stress. My heart was really pumping very fast.”

Aside from the rich cash prize, Jimenez also earned a tee-time in next year’s 148th Open Championship at Royal Portrush.

It will be the first occasion Jimenez will play the course given he did not contest the 2012 European Tour’s Irish Open but then he did get a look at Royal Portrush each day during the 2017 Irish Open in travelling from his hotel to Portstewart.

Americans Kirk Triplett (69) and Scott McCarron (68) tied for third alongside Canada’s Stephen Ames (69). All three finished on 10 under.

David McKenzie finished the best of the Australian field on 3-under and in a tie for 14th.