Opening with playoff pars following Alker’s missed his birdie attempt, Jimenez held off the Kiwi again on the second trip down the 18th hole, firing back-to-back par fours while Alker fell on his sword with a bogey five to deny himself a second Champions Tour victory. 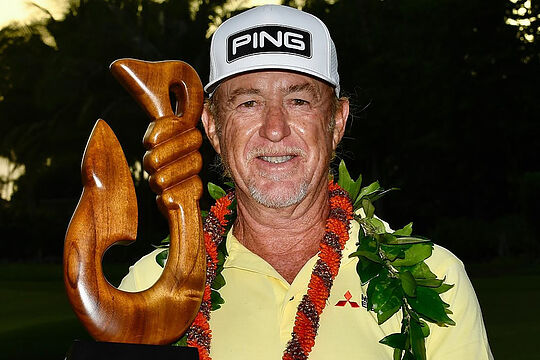 Despite today’s near-miss, it’s been an incredible run for the New Zealander. Alker has finished outside the top-9 just once since debuting on the seniors tour last year after Monday-qualifying at the Boeing Classic in August.

A win came in November at the TimberTech Championship and a narrow miss again a week later at the Charles Schwab Cup Championship saw him finish outright second. In the past six months, Alker has already gone close to earning on the Champions Tour what he took home between 1996 and 2021 on the Korn Ferry Tour.

Vijay Singh and Stephen Ames birdied the final hole for rounds of 4-under 68 and one shot out of the playoff.

Overnight leader Ernie Els held the 54-hole lead but failed to make a move finishing three shots behind with a 2-under 70. Els lost in a playoff here with Jimenez in 2020.

Rod Pampling was the lone Aussie in Hawaii finishing in a share of 28th.