Jimenez calmly holed an 18-foot birdie putt at the first extra play-off hole to not only successfully defend his title but to win the event for a fourth time in nine years. 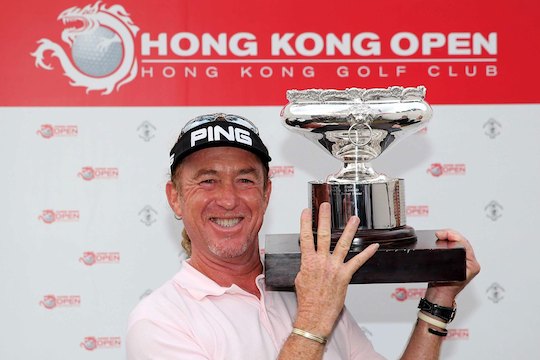 ‘The Mechanic’, as Jimenez is affectionately known, defeated Welshman Stuart Manley and Thailand’s Prom Meesawat after all three players ended regulation play locked at 12-under par in suburban Fanling.

Jimenez first won the event in 2005 and again in 2008 before last year becoming the oldest-ever European Tour champion at age 48 years and 318 days in capturing a third Hong Kong Open title.

The Malaga golfer birdied four of his closing eight holes in a closing round of a four-under par 66.

Manley went into the last day leading and looking to secure victory just weeks after regaining his Tour card at the European Tour Q-School in Spain.

Manley got off to bad start with a first hole bogey and while he birdied the third and fourth holes it was a roller-coaster opening 10 holes for the player who had started the second round of the recent World Cup of Golf – birdie, birdie, ace and then an 11.

The Welshman stalled with four pars from the 11th to 14th before a birdie at 15 and then a chip-in birdie at the last to make the play-off.

However his second shot at the first extra hole, the downhill par four 18th, was right hitting the roof of a corporate enclosure.

Bangkok-born Meesawat made the biggest move over the last day posting eagles at the third and 13th holes in a round of 65 as he strived for his first European Tour victory.

Meesawat’s second shot in the play-off was short of the green but he then applied pressure to his two rivals when he chipped to about six inches.

However there was no denying Jimenez with his birdie putt starting out to the right and just managed to find the right side of the cup before disappearing for also his 20th European Tour success since breaking through for a first win in 1992.

“I didn’t play well early in the week but said to myself today I have a good chance of matching the record of four wins and I managed to do that.”

Jimenez went into the tournament as one of two players along with legendary Australian Peter Thomson to have won the Hong Kong Open three times and with Taiwan’s Hsieh Yung-yo the only player to capture the trophy four times.

And despite their own disappointment in losing out in the play-off Manley and Meesavat collected a prize cheque of €84,294 to be sharing ninth place on the 2014 Race to Dubai.