Korean Choi Jinho has gone from soldier to OneAsia Tour winner when he holed an 18-foot birdie putt on the 18th green to claim the SK Telecom Open by a stroke from compatriot Lee Soomin.

Choi, who led after every round, closed with an even-par 72 to finish the tournament on 10-under par around the gruelling Sky 72 Ocean Course. 21-year old Lee, who broke the course record on day three with a 63, came in with a 71. 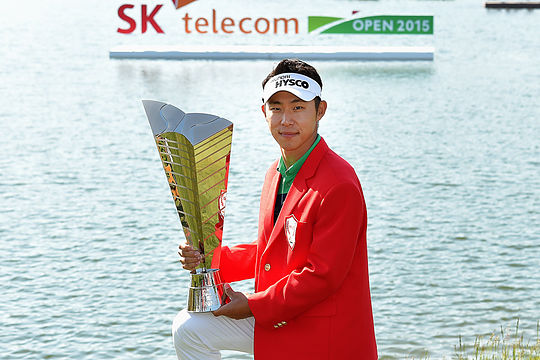 It is Choi’s first victory on OneAsia and in only the third tournament he has played since completing 20 months of national service. Prior to joining the services in 2012, Choi had shown his potential by winning three events on the Korean PGA Tour.

“Amazing, I am so relieved,” said Choi, who turns 31 this week, “It was a difficult battle all the way and I am very pleased my game held up.”

“It is an emotional victory considering everything and a surprise to come so soon. I guess I was just very up for it.”

Choi took a one shot lead into the final day but both he and Lee was tied for the lead after nine holes at 11-under. However, a costly double bogey from Lee on the 11th handed the ascendancy to Choi before he too ran up bogeys at 12 and 15, before breaking the deadlock with his pulsating birdie at the final hole.

The vanquished Lee was not disappointed with the result against a quality field in only the early stages of his professional career.

“This is my best result as a professional so I am very happy,” said Lee, “I made a great eight-foot par out on 18 under pressure which was very pleasing.”

The next OneAsia event is the US$1 million Singha Corporation Thailand Open at Siam Country Club’s Plantation Course, from June 11-14.