Cameron John has claimed the Australian Boy’s championship with a one stroke victory over Jordan Garner at Wollongong Golf Club. 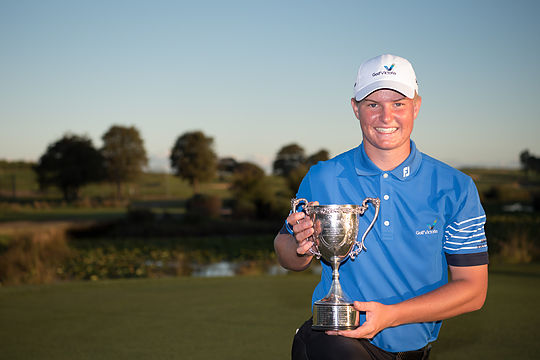 It was not all easy sailing for John who needed to dig deep at the penultimate hole to save par to avoid a sudden death playoff after Gardner had earlier carded a final round 68 to be in the clubhouse at 6-under. Heading down the 18th Johns was aware of the scenario yet played an aggressive long iron into the par 5.

“I hit some shaky shots, but holed a good putt on 17 to get me back into the game and was able to play 18 knowing that a par would be enough for the win,” said John.

“It’s awesome to win an event like this. It’s our national title and it gets you a start into the Australian Open and that’s pretty neat. It was a mental grind out there as I was just making pars, but I managed to get some great breaks, like on 16 with the putt there and obviously on 17. Overall, it’s a great result for me.”

John was solid all day carding a 1-under third round to open his final round in winning fashion with a string of pars to make the turn even for the round. On the back nine John played par golf all the way with the bogey on the 9th the only blemish on his card.

“That second round I had a lot of good swings and my only mistake was a three putt on nine. But I toughed it out and it was really great to come away with the win.”

New Zealander Tom Parker had set the early morning page in the 36 hole final day, carding a 63 to be at one stage leading the championship. Yet Parker closed with a 4-over-par 73 to finish in a tie for third position at 4-under along with Dominic Brettkelly.

Shaun Campbell, Josh Armstrong and Harrison Crowe rounded out the top-5 at 3-under.

In the Girl’s championship Grace Kim shot rounds of 74-68-73-72 to finish the tournament at 5-under par. A shot behind her was NSW teammate and day two leader Hannah Park, while Doey Choi completed the NSW trifecta in third place at two under par.

“I’m stoked,” said Kim about being told of the exemption.

“I really can’t put into words what that means and this win is so important. I honestly thought I would be in a playoff but I managed to get a birdie on the last for the win.”