American Dustin Johnson has made it back-to-back victories after capturing the Bridgestone Invitational thanks to a late final round flop from World No. 1 Jason Day.

Johnson, the reigning US Open champion, has jumped three places to become the new World No. 2 after a pair of closing 66s over the weekend handed him victory on the tough tree-lined Firestone Country Club course in suburban Akron, Ohio.

In the process, Johnson has now put himself into clear favouritism to win a second straight Major when he tees up next week in the 145th Open Championship at Royal Troon in Scotland.

And given the manner in which Johnson handled last month’s USGA debacle at Oakmont to capture a first Major, a second victory could be just 14 days away along the shoreline of the Irish Sea.

Day went into the last round tied for the lead alongside American Scott Piercy but was clearly fighting with his swing as evident during day three.

“I am not sure where ball is going,” he said post the third round.

And while the Australian eagled the second hole the writing was clearly on the wall as Day continued to struggle finding fairways.

“It’s obviously disappointing to not get the win here, but I feel like it’s coming around nicely. I’m playing some pretty good golf.”

“Every time I tee it up, I’m trying to win a golf tournament, and unfortunately I just fell a little bit short. I’m looking forward to taking the first part of this week off and trying to get some practice in.”

“I’ve never seen Troon before, so I’m hoping when I get over there, I’ll play Saturday, play Sunday, it suits my eye, and then I can play well around there because I think I’m really trending in the right direction here.”

“I’ve been playing some good golf, and you can’t win all of them.” 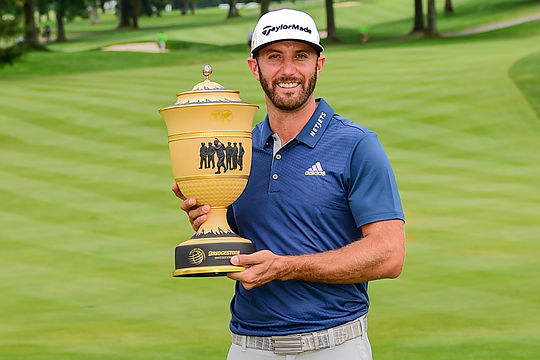 Sadly, Day’s efforts over the closing 18 holes included ending his round with a 15th hole bogey and then a 16th hole double bogey when he was forced to chip out from trees down the right side only to find a green side water hazard.

He then parred the 17th and bogeyed the 18th in a round of a two-over 72 to share third place on three under par.

It is the first occasion in six tournaments Day has led after 54 holes and failed to capture victory.

Double Major winning Jordan Spieth, who is now back to No. 3 in the world, closed with a 67 and tied for third with compatriots Matt Kuchar (66), Kevin Chappell (67) and the crestfallen Day.

His victory today was Johnson’s third WGC title after capturing the 2013 WGC – HSBC Champions in Shanghai and last year’s 2015 WGC – Cadillac Championship at Doral in Miami.

Johnson had spent last week in The Bahamas when he celebrated his 32nd birthday and a long overdue first Major.

However he was still three shots behind on the last day when he rolled in a 15-foot birdie putt on the 13th hole, and followed with a wedge into 8 feet for birdie on the next hole, and about the same time Day was finding huge trouble down the right of the 16th, Johnson blasted a 9-iron out of the thick rough on the 17th to 15 feet and rolled in the birdie putt to take command.

The Myrtle Beach-based Johnson now has 11 career victories in his nine years on the PGA Tour.

“I feel great,” he said. “I feel like my game is where it has been all year. I just haven’t been putting quite as well as I’d like. The last couple of weeks, I just putted a little better.”

He made it sound so simple, even as the back nine became so complicated.

Johnson’s only real trouble was down the last when he pulled his tee shot left into the rough and playing his second, he clipped a dead branch with his punch shot, and his ball finding deeper rough.

But instead of trying to play over a bunker, he pitched to the far collar of the green and lagged his putt to make sure he made nothing worse than bogey.

Adam Scott improved on his third round 73 with a final round 68 to move into a share for 10th place at even par.