In his short pro career, Johnson has emerged as a 21st Century version of John Daly but without all the emotional baggage that has surrounded Daly’s private life. 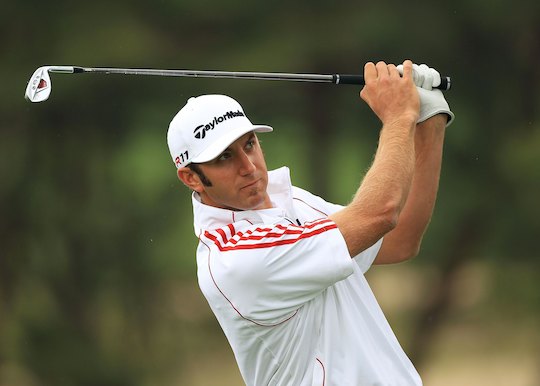 However there was the much-publicised relationship with Natalie Gulbis and the drink-driving charge at Myrtle Beach in March 2009 plus an on-course confrontation earlier this year when Johnson’s caddy had with the Golf Channel’s controversial Jim Gray.

And very much like Daly, Johnson is one of the PGA Tour’s ‘big boomers.

He generates club head speed of around 190 mph that is 35 mph more than the average, to launch drives averaging around 320-yards.

Also Johnson’s trainer, Randy Myers says Johnson is so physically strong and powering he can execute standing broad jumps that would put him in the top 93% among NBA players.

The 26-year old went into the final round of the 2010 US Open leading by three strokes but lost to Graeme McDowell by five after posting a Pebble Beach final round of 80.

Then in August, the South Carolina-born golfer was one stroke in front with a hole to play at the US PGA Championship but because of an incorrect interpretation of a ‘local rule’ missed out by a stroke in contesting the three-man Wisconsin play-off.

Maybe it was the nature of his Whistling Straits undoing when he grounded his club in what he thought was a waste bunker that has seen Johnson become one of the popular on the Tour.

One thing’s certain Johnson’s appearance in Sydney the week before the Presidents Cup is a big boost for the Australian Open.

Johnson confirmed his intention to compete in the November 10th to 13th Australian Open at Royal Sydney during his appearance in the recent Ballantine’s Championship.