Dustin Johnson has taken out the FedExCup tapping in for birdie on the last hole for a 2-under 68 and a three-shot victory over Justin Thomas and Xander Schauffele in the season-ending $45 million Tour Championship.

It is the first FedEx Cup title for Johnson, who squandered a chance to win in the final round four years ago.

The 36-year-old began the final round with a five-shot lead, and no one ever got closer than two shots. It was the fourth tournament in succession that Johnson held the final round lead and he was out of the gates early nailing an 11-metre putt for birdie at the third and picked up further shots at five and six to keep his closest rivals, Thomas and Schauffele, a comfortable distance behind him.

Johnson won the US$15 million prize, the biggest in golf, and his name goes on the FedExCup trophy alongside the world’s best including Tiger Woods and most recently Rory McIlroy. Johnson also becomes the first top seed since Woods in 2009 to win the title. 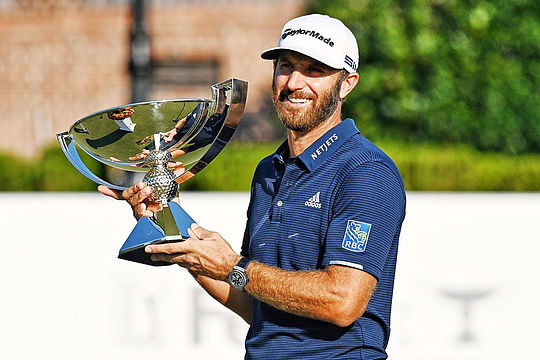 “It’s a very tough trophy to win,” said Johnson. “I controlled my own destiny, but I still had to go out and play well. I had a lot of great players right behind me. It got close at the end. I knew it was going to come down the stretch and I’d have to hit some golf shots.”

With 23 wins, six WGC victories and a US Open title to his name, Johnson’s career is among the best of the modern era. It brings closure to a fantastic year which has seen Johnson collect the Travelers Championship, The Northern Trust and the Tour Championship over the last few months and likely to be in the front seat for the PGA Tour Player of the Year.

Jon Rahm, Thomas and Schauffele tried their best to hunt down Johnson on the back nine, but none could put enough birdies on the card to place any serious pressure on him.

Just two Aussies qualified for the Tour Championship with Cam Smith finishing in a tie for 24th and Marc Leishman in 29th position from the top-30 who qualified.

A new season starts again this Thursday with two majors still to be played. The US Open begins in two weeks and the Masters will be held in early November. Johnson is sure to start one of the hot favourites at Winged Foot to add to his lone Major title that he won in 2016.