Fresh off his part in the USA’s thumping of the Internationals at the Presidents Cup, World No. 1 Dustin Johnson has confirmed he will return to contest next year’s Abu Dhabi HSBC Championship.

It will be the second year in succession Johnson’ will compete in the UAE capital and comes also as a big golfing boost to the region and to the European Tour event. 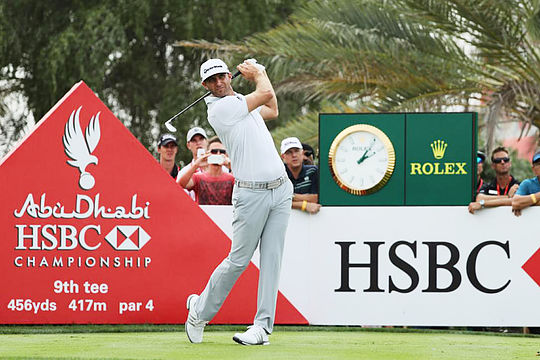 “I really enjoyed the event last year so much and that is why I am going back next year,” said Johnson.

“I like the golf course as it sets up great for my game and it’s also a great atmosphere with good crowds.”

“I went so close to winning this year so it would be nice to go one place better next year.”

Johnson was World No. 3 earlier this year when he finished a stroke behind England’s Tommy Fleetwood, after signing for a closing day 68.

The American had struggled with the effects of jet-lag over his opening round but Johnson regrouped shooting subsequent scores of 68 and 64 before eagling the 72nd hole and finish tied with former champion Spain’s Pablo Larrazabal.

The 2018 Abu Dhabi Championship will take place from January 18th to 21st and again at the Abu Dhabi Golf Club.

Soon after competing in the Middle East, Johnson returned to the States to win three events in succession through to late March and moved to No. 1 in the world, a position he has now held for 33 consecutive weeks.

And in the process Johnson this week has now become 10th all-time golfer to be ranked No. 1 in the world after moving one week ahead of Fijian Vijay Singh, who enjoyed 32 weeks as the game’s best player.