It was only a week ago that Dustin Johnson fell outside the world top-5 players for the first time in four years following a string of average results over the past 15 months.

Fast-forward a week and the newly-turned 36-year-old has put all that to bed after claiming his 21st PGA Tour career win at the $7.4 million Travelers Championship.

“I put in the work, so I feel like I’ve put in enough hard work to where my game should be spot on all the time. Obviously coming off of an injury, or surgery last fall, and then only playing a couple tournaments before our shutdown, I didn’t really get a lot of golf to get back in a rhythm,” said Johnson.

“I probably wouldn’t have played Colonial. If it would have been a normal season I wouldn’t have played there because I just wasn’t ready. I tweaked my knee, so I didn’t get to prepare properly. I felt like [my game] was really good, it was really close to being great at Hilton Head, and then obviously coming here, I really felt good about things.”

The former World No.1 seemed well out of contention on day one when Mackenzie Hughes carded a 10-under 60 leaving Johnson nine shots off the pace and in a distant share of 79th.

However subsequent rounds of 64 and 61 turned things around and despite a rollercoaster final round 3-under 67, which included an out of bounds at the 13th hole, it was enough to get the the job done by a stroke over Kevin Streelman.

Johnson has now won at least one tournament per year in the past 13 PGA Tour seasons and also gained the dubious honour of being the lowest first-round player to win on the PGA Tour in almost 40 years.

Perhaps a surprise to some is that Johnson has now equalled Tiger Woods with the most PGA Tour titles won since 2008 (21) and is three tournament wins ahead of current World No.1 Rory McIlroy.

To put that in perspective, the next closest on the career tally board is a four-way tie for third place with 12 wins, which includes Jason Day, Phil Mickelson, Justin Thomas and Bubba Watson. 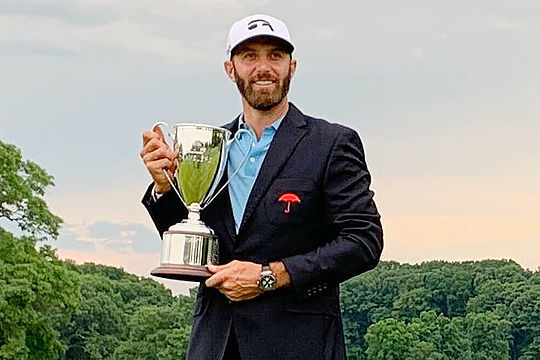 Someone who won’t be as pleased with his Sunday result is 54-hole leader Brendon Todd, who inexplicably fell away into 11th place.

Todd, who looks a solid lock to take out Rookie Of The Year honours with two victories already in the bag this season, couldn’t get anything going and settled for a birdie-free 5-over 75, which included a 12th hole he would rather forget.

With just just 10 metres to the stick from the bunker side rough, the 34-year-old made a seemingly impossible triple-bogey, shanking his ball directly to the right and landing at the back of the green before taking another four shots to get it down from there.

It was hard to watch and no doubt harder to play for a guy who has amassed close to $3 million in winnings this year alone.

World No.1 Rory McIlroy finished in a 9-way share of 11th place. He didn’t play poorly but just couldn’t do enough to keep up on the traditionally low-scoring TPC River Highlands layout.

“[My] decision making was terrible the last few days. Just some stupid shots and trying to take too much on at times. I think probably playing a little bit and just being a little more thoughtful on the course. Yeah, it’s just sort of dumb mistakes in there that I don’t usually make,” said McIlroy.

Lost in the weekend results was the newly-turned 50-year-old Phil Mickelson. Lefty showed us all he can still play at the very highest level with rounds of 64 and 63 giving him a one-stroke lead heading into the weekend before back to back 71’s left him with a share of 24th.

The few Aussies that made the cut got left in dust but the good news is that one of those to make it through to the weekend was Jason Day.

After failing to make the cut since the return of the PGA Tour, the Queenslander put together rounds of 67, 69, 69 and 68 to share 46th place.

Marc Leishman was another two shots back in 58th place while Greg Chalmers fell away over the weekend to take outright 67th.

The Tour now heads to Detroit for the $7.5 million Rocket Mortgage Classic.