Dustin Johnson has broken away from a four-way opening day pack firing a second round 3-under-par 67 to sit atop the leaderboard at the US Open being played at Shinnecock Hills in New York.

Johnson fired rounds 69-67 to be the only player under par and leads fellow Americans Scott Piercy and Charley Hoffman, by four going into the weekend.

After two days there have been just eight rounds under par and Johnson now holds two of them.

“I felt like today was another really solid round, played really well. A couple times where I hit a couple of bad iron shots, but every time I felt like I was able to save par, at least give myself a really good look at par,” said Johnson.

“My only bogey I made today on No. 1, I still had a decent look at par, 10-, 12-footer or something for par…I mean, I felt like today was really solid in some tough conditions.”

The US Open is arguably the greatest test in golf, and some big names struggled this week and missed the cut, namely the top 60 and ties, which turned out to be 8-over. 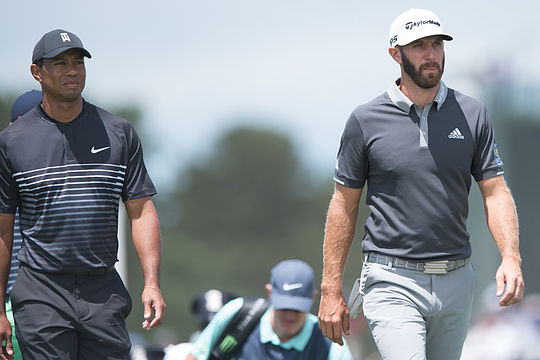 Tiger Woods made clutch putts late, yet his 10-over total (78-72) wasn’t enough for a weekend tee time. It’s the second missed cut of the year for Woods in 10 events and his eighth overall as a professional in major championships. It is his third at the US Open, after missed cuts in 2006 and 2015.

“I’m not very happy the way I played and the way I putted. I’m 10 over par. So I don’t know that you can be too happy and too excited about 10 over par.”

Jordan Spieth finished at 9-over (78-71) fluffing a chip on the last to miss by one after making four straight birdies over the back nine to be looking at making the mark. Rory McIlroy finished at 10-over (80-70) and Jason Day could not get going either, carding rounds of 79-73 to finish at 12-over.

Johnson entered this major as the top-ranked player in the world and fresh from success in last weekend’s St Jude Classic.

The world No. 1 demonstrated in his win two years ago at Oakmont that he can handle a course with lightning fast greens and heavy rough, though the fescue at Shinnecock is unlike anything that comes into regular play at the site of his 2016 championship.

Now he has the opportunity to bag a second major and he’s looking the part.

Just two Australians made the weekend of our nine starters in what otherwise was a poor showing.

Marc Leishman is currently our best in a share of 11th position at 3-over-par after an impressive second round 69, to be six behind Johnson with Aaron Baddeley sharing 35th position at 6-over.

Jason Scrivener, playing in his first major put up a solid performance to miss the cut by 1, Matt Jones finished at 10-over to miss by two, Cameron Smith fired rounds of 79-72 to be at 11-over and three short of the mark, whilst Day finished at 12-over and Scott and David Bransdon 13-over respectively.

Lucas Herbert rounded out the Aussies with rounds of 83-74.