Newly crowned World No. 1 Dustin Johnson shares the lead alongside four other players following the opening round of the US Open at Shinnecock Hills, and certainly appears to the man to beat.

Johnson fired a 1-under par in testing conditions to sit level with England’s Ian Poulter, and Americans Scott Piercy and Russell Henley.

No player has ever won the week before the US Open and then gone on to win the US Open title in the same year, but Johnson has the chance to create history following his victory last week at the Fed Ex St Jude Classic.

Shinnecock Hills tested the world’s best today as they battled stiff winds and testing pin locations. This is the US Open and the USGA certainly sets up the layouts to be as brutal as possible. 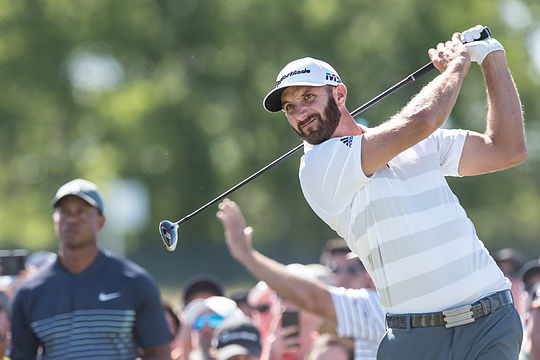 The course punished some of the game’s stars for their missteps early Thursday, leaving them facing a long climb Friday to avoid going home early.

Rory McIlroy, who holds the record for the lowest four-round score in America’s championship, posted a head-scratching 10-over 80 including a four-hole stretch on his opening nine where he went bogey, bogey, double, double.

Defending champion Brooks Koepka shot a round of 5-over and sees him in a share of 46th position. Two-time Masters champ Bubba Watson shot 7-over to join Phil Mickelson in a share of 88th position and in need of a solid round to make the top-60 and ties who progress to the weekend.

High scores were the order of the day with Jordan Spieth carding an opening 8-over-par to be one in front of Aussie Jason Day who fired a 9-over 79, and then there was Rory McIlroy’s 10-over 80.

Whilst it was a day of carnage for some, spare a thought for former British Amateur Champion Scott Gregory who fired an 92.

While some of the best players in the world were brought to their knees others thrived.

Jason Dufner produced some solid golf and finds himself in lone 5th position a stroke ahead of a string of players current sharing 6th position at 1-over including former US Open champion Justin Rose, Henrik Stenson, France’s Matthieu Pavonb, South Korea’s Byeong Hun An and Americans Charles Howell, Charley Hoffman and Sam Burns.

Aaron Baddeley and Marc Leishman are the best of the Australians at 4-over and in a share of 37th position. Leishman had a mixed day, spraying a number of drives, yet was superb with his short game to minimise the damage. Baddeley was out early and took full advantage of the benign conditions.

Matt Jones is at 6-over and in a share of 66th position followed by major debutante Jason Scrivener, who carded an opening 8-over for a share of 101st place along with Jordan Spieth and Adam Scott.