Former World No.1 Dustin Johnson proved he still has what it takes with a commanding five-shot victory over the in-form Rory McIlroy at the WGC-Mexico Championship.

The win is Johnson’s second in Mexico in the past three years and sees him become just the fifth player in the past 50 years to reach 20 PGA Tour title wins before the age of 35. It also extends his now 12-year long streak of having claimed at least one title every season since turning pro in 2008.

“This is a big one for me and it gives me a lot of confidence for the rest of the year,” said Johnson.

“It’s been a little bit since I’ve been in the lead with this kind of field and this calibre of players. I know Rory’s playing really well, he was not too far behind me so I definitely felt some nerves there at the beginning of the day.”

The 34-year-old moves from 60th place to 8th on the FedExCup Standings and is now hot on the heels of reclaiming his World No.1 title back from Justin Rose after moving into second place this week on the Official World Golf Rankings at the expense of Justin Thomas. 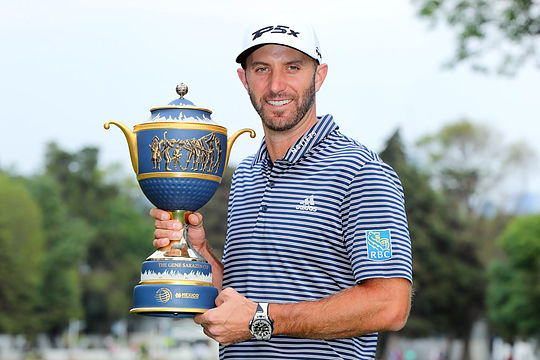 New World No.6 McIlroy continues to show superb form and was unlucky again this week not to claim victory. The Northern Irishman now has four top-5 finishes to his name this year alone and is surely very close to claiming his first Tour win since the Arnold Palmer Invitational in March last year.

“Some weeks you play well and someone just plays better and that’s what DJ did this week. When DJ has got a four shot lead and goes out and shoots five under par, he’s not going to lose,” said McIlroy.

“My game is right there, I’m really happy with everything. I’ve just got to stay patient, look at the positives and just keep persisting, putting myself in positions and sooner or later it’ll go my way.”

Tiger Woods struggled again today on the high-altitude Club de Golf Chapultepec layout. The 43-year-old finished with a respectable share of 10th place but could not get a read on the poa annua greens and missed several makeable birdies.

Woods will take a week off before playing back-to-back at Bay Hill and The Players Championship.

Justin Thomas turned around a disappointing tournament to move into a share of 9th place following a final round 9-under 62, which included six birdies on the back nine to tie his own course record at Chapultepec.