(Austin, TX:) Dustin Johnson’s odds in capturing a first Masters continue to shorten considerably after claiming a third victory in succession with his triumph at the WGC – Dell Match-Play Championship in Austin, Texas.

The World No. 1 was for much of the match in a class of his own before holding off a late round fightback to win 1-up over Spain’s gritty Jon Rahm.

In the process, Johnson became the first player since the inaugural World Golf Championship in 1999 to win all four WGC titles – a feat that alluded Tiger Woods.

Woods captured three of the WGC trophies 18 times but never the WGC – HSBC Champions, albeit competing in the event on just two occasions.

Johnson also becomes the first player on the PGA Tour since Rory McIlroy in 2015 to win three events in a row after moving to World No. 1 after capturing the Genesis Open and then claiming victory in the recent WGC – Mexico Championship. 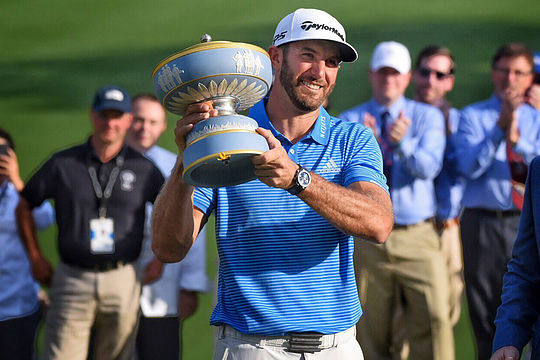 Johnson had faced his sternest test earlier on Sunday after being forced to play all 18 holes for the first occasion in six matches before claiming a 1-up victory over Japan’s Hideto Tanihara.

And while the 22-year old Rahn became the first Spaniard to fight his way through to the final, Johnson showed him no favours winning four holes in succession to race to 4-up after only six holes before Rahn stopped the rot in halving the 7th hole.

However, Rahn again showed his growing frustration in losing the 8th with a bogey to be 5-down ahead of winning birdies at the next two holes to be 3-down.

Johnson still looked to be headed for a comfortable victory in getting back to 4-up with a winning birdie at 12 but Rahm had not read the script and proceeded to birdie 13, 15 and 16, and after each parred the par three 17th, heading down the last 1-down.

Both parred the last for Johnson to also claim his 15th PGA Tour win that now includes five WGC victories.

“I was tested a lot out there but then I didn’t give him any holes except for the 10th where I three-putted,” he said.

“But it was tough out there as the greens were really fast and the wind was affecting all the putts. Jon played really well but, as I said, I really didn’t give him anything.”

“It’s great to win three tournaments in a row and it shows I am playing pretty well.”

“Today was a really tough day and this whole weekend was but I am proud of the way I stayed in there even though Jon made some birdies on the back nine.”

Johnson earned a first prize cheque for US$1.6m that has taken his season earnings to the top of the PGA Tour money list with prizemoney in his seven 2016/17 season events totalling US$5.78m.

Johnson will contest this week’s Shell Houston Open some three hours drive south of Austin before then heading to the April 6th starting Masters.

In the play-off for third American Bill Haas won 2 & 1 over Hideto Tanihara with the 38-year old lighting-up their match with an ace at the par three 7th hole.

Tanihara hit an 8-iron that landed on the green and proceeded to run some 60-feet and disappear into the bottom of the cup.

It gave him a 1-up advantage and then 2-up when he birdied the ninth before Haas regrouped to win five holes in succession before closing out the match with a par at the 17th.

“Even though the match was to decide third place you still want to come out on top, so I was fortunate as I had a few good breaks over the back nine,” said Haas.

“Fortunately, his hole-in-one at seven only meant losing one hole so overall I was fortunate to win the match.”

Only two Aussies teed it up in Austin and with Jason Day withdrawing due to his mother’s medical issues it was up to Marc Leishman to carry the flag.

Leishman, who won last week’s Arnold Palmer Invitational, made it as far as the round of 16 before an in-form Phil Mickelson downed the Aussie 4&3.