(Glen Oaks, Long Island:) World No. 1 Dustin Johnson overcame a four-shot deficit to end a near four-month victory drought declaring he deserved victory more than Open Champion Jordan Spieth who he defeated in a play-off for the Northern Trust title near New York.

Johnson pulled off one of the greatest play-off drives of his career to set-up his victory birdie at the first extra-hole on the Glen Oaks course in Old Westbury.

The win was Johnson’s first since he captured three victories in succession in the lead-up to withdrawing from April’s Masters.

It is also Johnson’s 16th taste of success on the PGA Tour and strengthens his case for the nomination of the PGA Tour’s Player of the Year award. 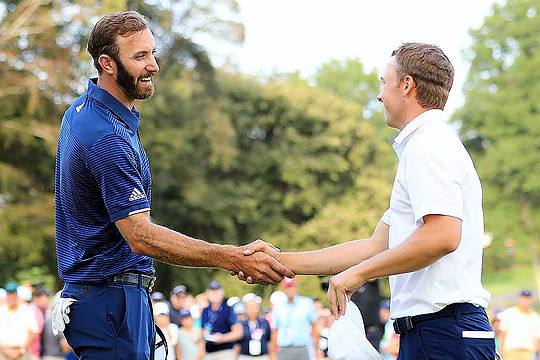 The 33-year Johnson produced a final round 4-under 66 to tie Spieth, who could only manage a 1-under 69. Both players ended regulation play locked at 13-under and four shots clear of Jhonattan Vegas (65) and Spain’s John Rahm (68).

However, at the first extra hole, the uphill dog-leg par four 18th, Johnson took on the water hazard guarding the left side of the fairway.

Johnson then put his second shot to just three-feet from the pin to secure the win seconds after Spieth had putted out for a par.

“So, is it a big win for sure. Especially after the start I got off to this year, and then you know, having an injury there right before Augusta.”

“It’s been a tough road to get back to where I feel like my game’s able to compete out here again.”

“You know, finally this week’s the first week that I felt like my game was in really good shape and is back to where it was, where I feel like I’ve got complete control over it.”

Spieth, for all intents and purposes, looked well on target for a third Tour success in five events and a fourth this season heading to the final round.

And while he birdied the third and fifth holes, the first sign of a chink in his armour came when he proceeded to double-bogey the sixth and then bogey the ninth hole before both players birdied the 13th to be tied, Spieth went one ahead with a 14th hole birdie.

However, Johnson levelled the now head-to-head encounter when he birdied the 15th and then for Spieth to find the ‘side-door’ with a par-saving putt on 17 and Johnson to do exactly the same from 17-feet behind the flat at 18 to end regulation play.

Spieth, who could move back to World No. 2, was very gracious in defeat.

“No. I didn’t lose it tournament. He won it, you know,” said Spieth.

“I played well. Game feels good. And I recognised a couple tendencies that I got into my swing towards the end of the round that prevented me from hitting great iron shots like I did before, so I know what to work on.”

“I feel great about my game. I had two great putting days. I had one bad putting day and one very average. Just need to get the putting more consistent.”

The victory is also Johnson’s second win in the event and his fourth in the history of the FedExCup Playoffs.

Jason Day lead the Aussies at T6 with a Sunday 67 making amends for a poor second round. Day’s finish saw him move to 29th on the FedExCup points table just inside of the all-important top 30 needed to play the Tour Championship.

Geoff Ogilvy’s season came to end after bogeying the 16th and double-bogeying the 18th hole. He will next play at the CIMB Classic but will be back on course as vice-captain for the International team at the Presidents Cup in late September.

Rod Pampling was the only other player to make the cut at T54. The Queenslander’s hopes remain alive with a 71st FedExCup placing allowing him to tee it up in Boston this coming week.

Cameron Smith and Marc Leishman both missed the cut but will remain in play for the Dell Technologies Championship thanks to a 44th and 20th position respectively on the FedExCup table.