Johnson secures third win of the season in Canada

World No.1 Dustin Johnson made up for a missed cut at the recent Open Championship by collecting his third victory of the season and 19th on the PGA Tour at the RBC Canadian Open on Sunday.

Johnson shot a final round 6-under 66 to finish at 23-under-par for a three-stroke victory over Whee Kim and Byeong Hun An. Johnson also won at the Tournament of Champions at Kapalua in January and the FedEx St. Jude Classic in June in Memphis, Tennessee.

Johnson entered the day in a four-way tie for the lead with Kim, Hun An and Kevin Tway but seven birdies and a bogey saw him pull away from the group. He started the day with a pair of birdies on his first two holes to make an early move and held on from there to secure the victory.

“It was definitely good to get off to a fast start,” said Johnson. “That’s definitely always good, especially when the leaderboard is so bunched up.”

“I just needed to get out in front. If I could get ahead I felt like I could play well and keep myself in the lead for the rest of the day.” 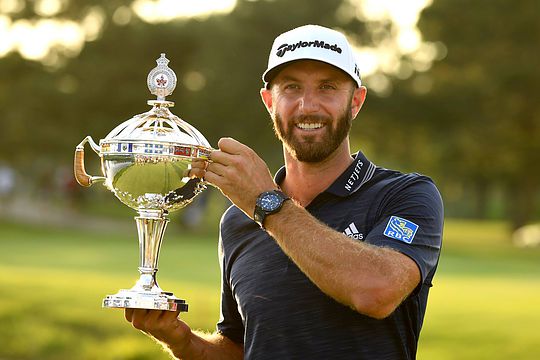 While Johnson was one of six golfers to shoot all four rounds in the 60s at the Canadian Open, he went lower than everyone else did over the final three rounds.

Johnson also finished third at the US Open in June, and has now set himself up as one of the big favourites for the final major of the year coming up next month. He has four top-10 finishes at the PGA Championship in his career.

In what is becoming an all-too-common occurrence worldwide, it may also be the last time the Canadian Open will he held at the Glen Abbey layout.

ClubLink, the owner of the property, is looking to put a housing and commercial development on the land and the tournament may not be back here again. Hamilton Golf and Country Club is hosting the event next year and in 2023.

American Keegan Bradley finished in fourth place at 19-under-par after firing an 8-under-par 64, the low round of the day, while Mexico’s Abraham Ancer came in fifth at 18 under.

Aaron Baddeley finished in a share of 65th position at 6-under to be the best of the Australians, having missed four consecutive cuts coming into the tournament. Cameron Percy finished at 5-under for a share of 69th position with Percy advancing to the weekend for the fifth consecutive time in his sixth start at the RBC Canadian Open.

Rod Pampling was next best Aussie finishing at 2-under for 77th position.