Dustin Johnson tamed the Blue Monster to capture the WGC – Cadillac Championship in just his fifth event back after a self-imposed exile from the game.

Johnson, 30 came from five shots back at the start of the final round to win by a stroke with a round of 69 for a nine under par victory tally on the Trump Doral course in suburban Miami.

Fellow American JB Holmes, who had shot a first round 62, posted a disappointing fourth round 75 for second place at eight under par.

Adam Scott finished equal 4th alongside Henrik Stenson with the only blemish of Scott’s first tournament of 2015 coming on Saturday where he struggled around the Blue Monster layout to post a 75.

The T4 result was made even more impressive by the fact that it was Scott’s first week without his broomstick putter, which was dumped in preparation for next year’s Tour ban. 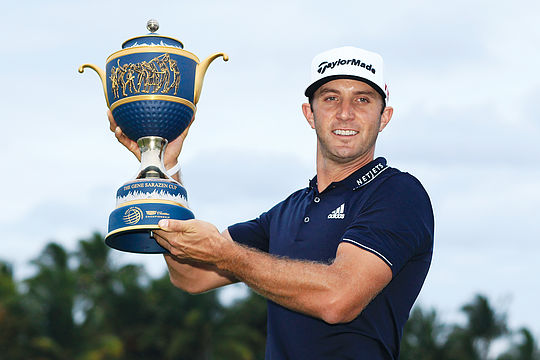 Johnson collected his ninth PGA Tour success and his second straight WGC victory after capturing the 2014 WGC – HSBC Champions in Shanghai, just two weeks after losing out in a play-off for the Northern Trust Open in LA.

“This win means everything as it’s been a tough road so I’m delighted,” he said.

“But there has been some great things that have happened to me since I’ve been away including the birth of my son and with me and Paulina doing great.

“So it just feels awesome to get that W up today as I played great.

“I knew I was really good but then I knew there was something missing that could make me really great, and I’ve really been working hard on that aspect of my game and it’s showing now.”

Johnson shocked the golf world last August after missing the cut in the Canadian Open, by announcing he was taking a self-imposed break from the game. The announcement sent the social media world into overdrive with suggestions he had been suspended for possible drug use – something the PGA Tour quickly denied.

The win should lift Johnson to his current ranking of No. 16 in the world to a career high of No. 6 while Johnson also collects a prize cheque for $US 1.53m.

And while Johnson has won nine times in his pro career he singled out this win as particularly special.

“All of my wins have been good but this one might be the best for sure,” he said.

“It’s tough … I am just so excited right now I can hardly talk but it feels great and this one by far the best one.”

Jason Day and John Senden were the next best of the Australians in a tie for 31st.