Zach Johnson is the 144th Open Champion after defeating South African Louis Oosthuizen and Marc Leishman in a four hole play-off on the Old Course at St. Andrews this morning.

It is Johnson’s second Major Championship title and comes eight years after the 38-year-old won the 2007 Masters at Augusta National. 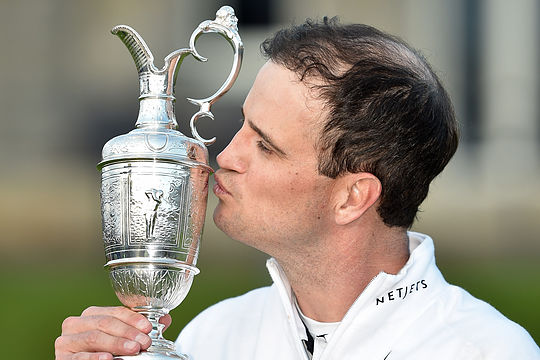 All three players ended regulation play tied at 15-under before Johnson finished one-under par and one fewer than Oosthuizen while Leishman never recovered from dropping a shot at the first extra play-off hole.

Jordan Spieth agonisingly failed to keep his calendar Grand Slam dream alive – the 21 year old needed a birdie on the 18th hole to join the four-hole aggregate play-off, but saw his approach spin back off the green into the Valley of Sin.

Johnson had set the clubhouse target on 15 under after a closing 66 that was matched 40 minutes later by Leishman, whose total of 130 for the third and fourth rounds – he carded a flawless 64 on Sunday – equalled the lowest 36-hole total in Major history.

Oosthuizen, who won the 2010 Open at St Andrews, still had two holes to play and after a crucial par save on the 17th the South African birdied the 18th from five feet to make it a three-way play-off on the first, second, 17th and 18th.

Johnson and Oosthuizen both birdied the first as Leishman three-putted from long range, and Johnson edged ahead with another birdie on the second.

What’s In The Bag – Zach Johnson

All three players bogeyed the 17th, and after Johnson missed his birdie attempt on the 18th, Oosthuizen’s attempt from six feet also missed to give Johnson his second Major title, eight years after victory in the Masters Tournament.

An emotional Johnson said: “I feel blessed to be the champion, I feel honoured to part of the history of this game and to don my name on that trophy, especially with the names before me. Humbling and surreal are two words that come to mind.

Victoria’s Marc Leishman was happy with his performance but was ruing his luck on the first hole of the playoff where a divot put his bid to become the first Australian since Greg Norman in 1993 to win the Claret Jug, in jeopardy.

“I drove it straight into a divot which was pretty disappointing, especially with that pin and the burn right in front I had no chance of getting anywhere near it. That was about as good as I could have done and then I three putted,” said Leishman.

“I was on the back foot as soon as I hit it in that divot and made the five on the first.”

“I am obviously pretty disappointed at the minute, having a chance to win it and not being able to take it out but that’s golf unfortunately,” added Leishman.

“I gave it my best shot, Zach just played really well in the playoff and I didn’t have my best stuff there.”

Jason Day was also left wondering what might have been, after his birdie putt at the final hole, which would have given him a spot in the playoff, came up short.

Day closed the tournament at 14-under and in a tie for fourth alongside Jordan Spieth, who was bidding to become the first person since Ben Hogan in 1953 to claim the first three majors of the year.

It looked like Steve Williams’ return to the bag had paid off handsomely for Adam Scott with the Queenslander 6-under and bogey-free through the first 10 holes today.

However, a bogey at the par-5 14th kickstarted a stunning collapse that saw him fire off three bogeys and a double-bogey at the 18th to slip back to 10-under and equal 10th. Those five dropped shots ended up being the difference between getting a spot in the playoff or not.

“It’s hard to digest it all at the moment,” said Scott.

“I probably needed a really good back nine and I had a really poor back nine. I feel like I wasn’t even in it at that moment. I’m disappointed the way I played the last five holes for sure.”

Marcus Fraser was next best of the Aussies at 7-under (T20) with Matt Jones and Steven Bowditch at 6-under in a tie for 30th.

Major debutant Scott Arnold fired a final round 66 to move up the leaderboard alongside John Senden and Geoff Ogilvy at 5-under and equal 40th.

Greg Chalmers (T58) and Brett Rumford (T74) were the last of the Aussies to make it through to the weekend.