NSW’s Brendan Jones missed the cut last week but has timed his run to perfection – securing his maiden title of the Japan Golf Tour season and along with it, a place in his fourth Open Championship to be played at Muirfield later this month.

The Gateway to the Open Mizuno Open 2013 is a pivotal event for competitors on the Japan Golf Tour with a series of exemptions to The Open Championship at stake every year. 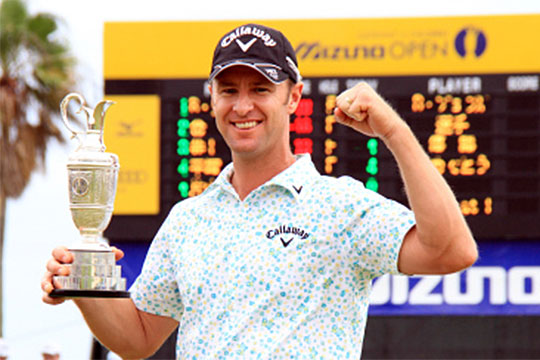 The first four places in the tournament not otherwise exempt, plus two from a cumulative money list from the start of the season, earn spots at Muirfield.

Heading into the final day, the 38-year old Canberra resident was at 15-under and two strokes clear of Korean Kyung-Tae Kim, himself looking to resurrect his own flagging fortunes of late.

Both players had slipped out of the world top 100 with Kim sliding to No. 164 at the beginning of this week, after being a Top 25 player and earning an automatic spot on the International Team for the Presidents Cup at Royal Melbourne in 2011.

Playing together in the final round, the pair extended the gap over the chasing pack on the front nine with a string of birdies and an eagle to Jones on the 6th, before both bogeyed the 9th to leave Jones three clear with nine to play.

Jones traded birdie with bogey on the 11th and 12th but maintained his three-stroke edge over Kim to shoot a four-under 68 and seal a 13th Japan Golf Tour title and his second Mizuno Open, having also won in 2004.

Jones’ 19-under total earned him ¥22,000,000 (approx. AU$243,000) with Kim (69) finishing three strokes adrift in outright second place. Japan’s Makoto Inoue was alone in third at 13-under after a final round 68. Both Kim and Inoue will also be joining Jones at the Open Championship.