Jones comes out on top in Utah Championship playoff

American Kyle Jones outlasted two others in a playoff on Sunday to win the Korn Ferry Tour Utah Championship on Sunday.

Jones, and fellow Americans Paul Haley II and Daniel Summerhays all finished the final round at 20-under-par for the tournament and went head-to-head in a playoff where Jones triumphed with a birdie over Haley on the second playoff hole after Summerhays was eliminated on the first. 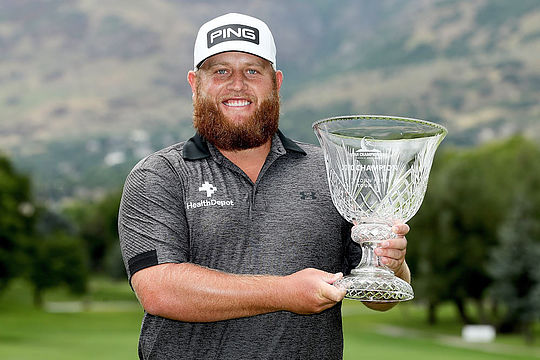 Jones, 26, was two behind Summerhays’ clubhouse lead with four holes to play on Sunday, before an up-and-down for birdie at the par-5 15th and stiffing a wedge shot to approximately metre for birdie on the par-4 17th helped make up the necessary ground in a late charge of precision golf.

The victory moves Jones to eighth on the season money list, as he chases returned playing rights on the PGA Tour after his rookie year in 2018-19, where he recorded three top-25s in 26 starts but failed to retain his card.

While the spotlight was on Jones, Daniel Summerhays almost pulled off the greatest goodbye present to himself with the Utah Championship being the final professional tournament of his career.

Prior to teeing off last week, the 36-year-old had called time out on his almost decade-long PGA Tour career in which he won nearly $9 million. He will now be heading to Davis High School to coach their golf team.

It put Ruffels in a share of third position and only a stroke behind the leaders moving into the final day, yet a closing round of 73 saw him drop 24 places to finish in a share of 27th position.

Jamie Arnold finished the best of the Australians in a share of 18th position finishing at 15-under-par, five shots off missing the playoff.

Ruffels was the next best Aussie followed by Mark Hensby, who finished in a share of 52nd position, with Brett Drewitt rounding out the Australians who make the weekend at 71st position.

The cut came in at 5-under-par with Harrison Endycott missing the weekend after posting 1-under for two rounds.