Despite a late scare on the tricky 17th hole at The Australian Golf Club, Matt Jones will take a 3 shot lead into the final round of the Australian Open as he looks to repeat his victory here in 2015 where he stormed home to win by a stroke from Adam Scott and Jordan Spieth.

At one stage, Jones enjoyed a four shot lead but a pushed 2 iron on the 17th into the pine needles on the right followed by a weak approach shot leaving a delicate 20 metre chip resulted in an adventurous bogey that had Jones heading down the 18th with a two shot lead. 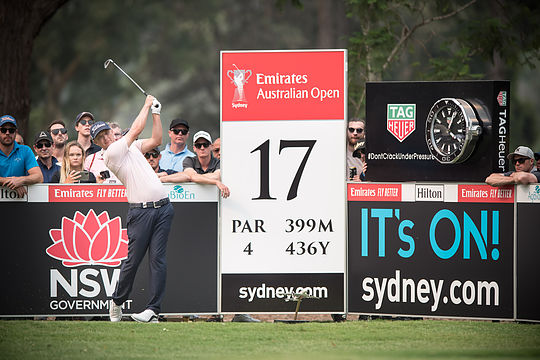 A birdie on the final hole regained the momentum for Jones and undoubtedly will put him in good stead for tomorrow’s final round.

“I started a little shaky and then had to minimise the damage on 17, but the I know this course well and when you can take advantage of the opportunities it offers,” said Jones.

“I was very calm out there today and all week I’ve been very excited to be able to play here. Today it was fun to play with Paul (Casey) as we played a lot in College. I enjoyed it.”

“Tomorrow, I’ll stay claim, one shot at the time, the old saying. Yes I’ll draw on the memories of 2015 when I won here, but it’s another round. I know the course and the breaks on the greens, so hopefully I can take advantage of that and get out there an enjoy the moment.”

The round of the day, and the best round of the championship so far, went to Jamie Arnold who fired an impressive 7-under 64 early to jump up the leaderboard after opening rounds of 70 and 71. Arnold, who narrowly missed gaining his PGA Tour card for this season, is currently in 6th position.

American Cameron Tringale continues to remain a force in this championship, firing a 2-under-par 70 to be at 10-under-par for the tournament and in outright second position behind Jones.

The final round is again shaping up to be a classic Sunday with twelve players within five strokes of the leader, the same margin as Cameron Davis was in arrears going into the final day when he won in 2017 here at The Australian.

Yet, you would have to favour Jones to take another Australian Open title. He’s played this course many times as a junior and amateur and knows it backwards having spent his formative years under the watchful eye of local professional, Garry Barter.

Whilst the layout is not a punishing as in previous years with little or no rough, the pins have been in difficult locations so you can be assured of final day dramas.

I’d be also keeping a watchful eye on the American Tringale as his ball striking today was superb and he left plenty out there – he may just rain on Jones’ parade.