Steve Jones fired into the first round lead at the John Hughes Nexus Risk Services WA Open Championship with a course record round at Cottesloe Golf Club.

Playing early in the morning Jones took advantage of the scoring conditions to set the new course record at 9-under 63. 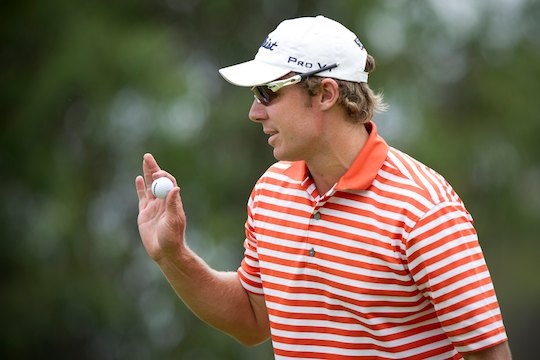 “It’s amazing, I haven’t had many course records over the last few years. It’s hard to get them, scores are pretty good amongst the guys,” said Jones.

“It feels great to know that no one has surpassed it but hopefully I can beat it tomorrow.”

Jones opened his round with a birdie before putting the only blemish on his scorecard at the second hole.

Playing with plenty of momentum Jones almost came unstuck at the par-4 16th when his drive crossed two holes coming to rest against a tree, left of the 14th fairway.

Taking an unplayable, Jones hit a full wedge shot to within eight foot of the hole and went onto one putt for par.

“It was probably the worst shot I’ve hit this year, but to make a par even with a penalty shot really kept me going,” added Jones.

“I was 8-under at the time and to drop a shot would have been really deflating.”

While it might be the low light of an incredible round, Jones showed determination to birdie the 17th.

“I hit the bad shot but because I was so far under par I was able to refocus pretty quickly,” added Jones.

“It was good to go on and get a good score and not clam up like I have in the past.”

“That gives me a lot of confidence for the next three days.”

Today was a significant achievement for the big hitting 30-year-old as it was also his career low round.

“I knew you can go after this course, I have played a lot here in the past,” added Jones who finished T3 at the WA Open the last time it was played at Cottesloe Golf Club.

“I didn’t really dominate with my driver, it was more about positioning for me and hitting a lot of really good iron shots and making putts.”

“I could name 10 great shots that I hit but you do that when you are playing well.”

Also renowned for his length off the tee, Fox wasn’t surprised to see the course setting up well for the big hitters on the PGA Tour of Australasia.

“It’s the kind of golf course where if you drive it well it gives you a lot of birdie chances. I just figured this week I am going to take it on,” said Fox, who reeled off 10 birdies and two bogeys in the first round.

“If you’re a longer guy it probably makes it play more like a par-68, I’m not surprised to see a few really low scores out there.”

Dartnall was another player anticipating low scores this week.

“In the practice rounds at the start of the week were all saying that low scores were out there. The greens are a bit soft, so everyone can really attack every flag,” said Dartnall who is enjoying his position as the leading West Australian.

“There is a little added pressure because it’s in my home state but it’s also nice to be staying at home and being around friends.”

“It’s really all about what kind of pressure you put on yourself. I have come into the week pretty relaxed, it’s a great spot to be in and I’m happy to be there.”

Ensuring the day had plenty of highlights; West Australian Andrew Gott aced the par-3 11th in the afternoon field.

The top-5 on the leaderboard was rounded out by Daniel Nisbet and leading amateur Todd Sinnot on 7-under 65.

A further shot back again are Peter O’Malley, Craig Hancock and Paul Spargo.

The second round of the John Hughes Nexus Risk Services WA Open Championship will tee off at 6.45am tomorrow morning.

The John Hughes Nexus Risk Services WA Open Championship will be played at Cottesloe Golf Club in Perth, from 16-19 October.

Being played for a prize purse of AU$110,000 the winner also receives Official World Golf Ranking Points and becomes fully exempt on to the PGA Tour of Australasia for the remainder of this season plus a further two years.