Sunday’s rollercoaster final round of the 100th Emirates Australian Open championship had an additional silver lining for three players with Matt Jones, Rod Pampling and Nick Cullen securing their places for the 145th Open Championship at Royal Troon next July.

In the first event of The Open Qualifying Series, Jones savoured his first national Open title with a nailbiting win over world number one Jordan Spieth and in the process, locked in his only major start for 2016 to date – an anomaly the 35-year old will surely rectify with an extension of the fine play he showed at The Australian. 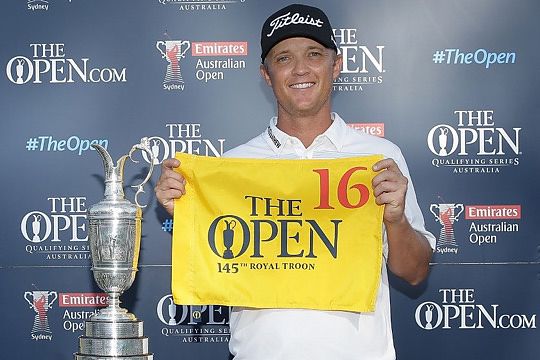 Matt Jones is on his way to the 2015 Open Championship after winning the Australian Open (Credit: R&A)

With runners-up Spieth and Adam Scott already exempt, the next spot went to Pampling who earned his place in astonishing style with a ten-under par 61 on Sunday.

The 46-year old’s phenomenal round eclipsed the course record set by Spieth in winning last year’s title by two strokes, albeit the American faced far more difficult final round conditions and the pressure of the lead.

Pampling also earned a start at The Open by finishing runner-up to Spieth in 2014 and by now must be loving this Open Championship Qualifying Series format.

The third and final place went to South Australian Nick Cullen on a World Ranking countback from NSW’s Lincoln Tighe, after the pair had tied for fifth place at three-under. Cullen secured the qualifying place thanks to his higher position in the Official World Golf Ranking.

Jones will make his third consecutive appearance in The Open after finishing tied 30th at St Andrews this year.

Pampling will make his ninth Open appearance at Royal Troon, where he finished tied 27th in 2004, his joint best finish in the Championship.

When Tighe missed a 10-foot birdie putt on the final green, 31-year old former Australian Masters champion Cullen secured just his second appearance in The Open after debuting at Royal Lytham in 2012.