Damien Jordan has won the 2017 Victorian PGA Championship, the first event of the 2017 ISPS HANDA PGA Tour of Australasia season. 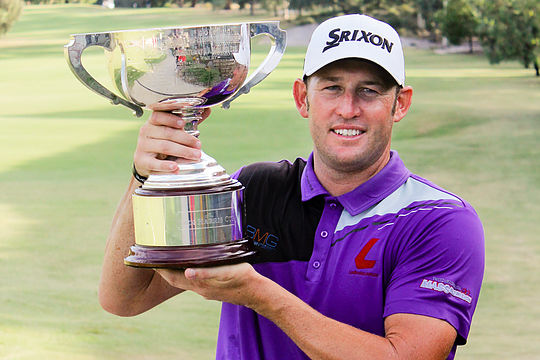 “I started with a bang this morning shooting 65 but with the wind getting up I knew it was going to be tough,” said Jordan, who had just a 30 minutes break in between the third and fourth rounds.

“After starting so well I knew every par was another hole closer to getting there and Pricey (Aron Price) pushed me the whole way.

“He made a great birdie on 17 and had really clutch putts all the way through the round. I knew I had to make that last putt if he made his; it was tough work out there today.”

This is Jordan’s first win on the ISPS HANDA PGA Tour of Australasia and secures his status until the end of the 2018 as well as the first place prize cheque of AU$15,000.

The Victorian PGA Championship title caps of a huge week for Jordan, with he and his wife welcoming their son, Brody, into the world on Monday.

“I don’t know if she (wife, Amber) knows just yet so she’ll be the first person I ring. She’s going to be over the moon,” added Jordan.

“It’s worth every bit of hard work and all the time we spend away from each other, it makes it all worth it.”

His win at Huntingdale is also world’s away from Iraq, where he did two tours with the Australian Armed Forces before he joined the ISPS HANDA PGA Tour of Australasia in 2015.

“To come back from where I did, the places I’ve been and the demons I’ve fought off to get here, it’s a big achievement for me,” added Damien.

“Once I check Facebook, I know it’s just going to be all the boys on there saying congratulations.”

Finishing runner-up was Aron Price on 14-under the card while tournament favourite and European Tour winner Marcus Fraser, James Marchesani and Gareth Paddison were tied 3rd on 11-under the card.