Brian Stuard defeated Jamie Lovemark on the second hole of a playoff Monday to capture his first PGA TOUR win at the waterlogged Zurich Classic of New Orleans.

Winless in 100 career starts on the Web.com Tour and in 119 attempts on the PGA Tour, Stuard finally broke through in his 120th try at this rain-shortened tournament.

Byeong-hun An was eliminated on the first hole of sudden death, Stuard and Jamie Lovemark went back to the 18th tee. And after a poor drive caused him to have lay well back for his third shot on the par 5, Stuard delivered the clutch shot of his life as he nailed his approach to within a metre.

He converted that short birdie putt to beat Lovemark and pick up a title that gives him a spot in next year’s Masters and some breathing space to remain on the PGA Tour.

Stuard’s best previous PGA Tour finishes were a pair of second places in Mexico, one in 2010 and the other in 2014. He arrived in New Orleans with conditional status on the PGA Tour, meaning he could only play in tournaments that had room for him when enough higher-ranked players skipped the event. His win earning not only US$1.6million but a two-year exemption on the main tour. 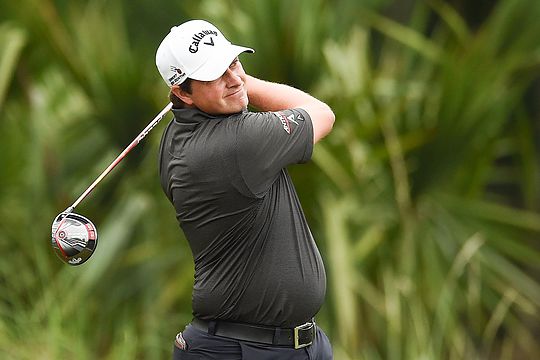 ‘I’ve always been, I guess, a journeyman kind of player, just always grinded it out,” said Stuard, who became the seventh first-time winner in New Orleans in the past 11 years.

Stuard played mostly on the PGA Tour in 2010, as well as 2013-15. In his rookie season on Tour in 2010, he finished second at the Mayakoba Golf Classic and had another runner-up finish at the same event in 2014, a season that included three top-10 finishes.

But for most of the 2015 season, as Stuard tried to adjust his swing, the results were not there. It led to conditional status on the PGA Tour this season

“You just had to have the confidence to say, One day, it’s going to be your time.”

A PGA Tour event hadn’t been shortened to 54 holes since the 2013 Hyundai Tournament of Champions at Kapalua Golf Club. The last Monday finish was at the Farmers Insurance Open at Torrey Pines in early February.

Stuart was not perturbed about the shorting of the tournament but world number one Jason Day, who finished in a tie for fifth with Chris Kirk at 13-under, would liked to have had it differently.

“I just wish it was 72 holes,” Day said. “At least I gave myself an opportunity to be around the leaders.”

Stuart Appleby was the next best Aussie in a share for 11th position with rookie Ryan Ruffels securing a tie for 20th along with John Senden and Marc Leishman.