Four of golf’s biggest stars went head-to-head Saturday night in the US, with Justin Thomas and Jordan Spieth emerging victorious in the 2022 edition of “The Match” against Tiger Woods and Rory McIlory.

Thomas and Spieth won 3&2 in the 12 hole, made-for-TV event at Pelican Golf Club in Belleair, Florida.

This was Woods’ first competitive appearance since The Open in July. He withdrew from last week’s Hero World Challenge with plantar fasciitis but said he had been playing well at home. He has struggled with his health throughout 2022 and played in just four events the Masters Tournament, the PGA Championship, the JP McManus Pro-Am and the Open Championship.

Thomas and Spieth, who have a combined five major titles, were solid from start to finish. Thomas made several clutch putts to win the 2nd, 4th and 8th holes, while Spieth hit an incredible shot on the 10th hole and then rolled in a putt to secure the victory. 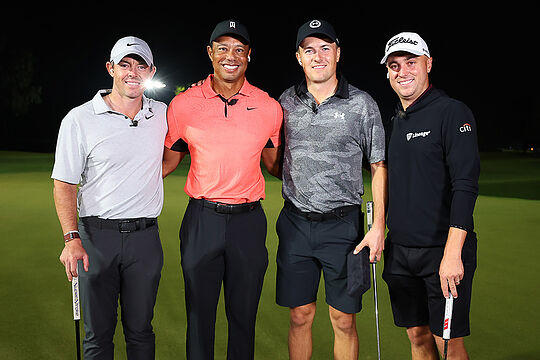 It was a unique event, in part, because it was one of the first times we’ve been able to watch top professionals play under the lights. The event raised money for victims of Hurricane Ian in southwest Florida earlier this year.

Woods lost to Phil Mickelson at the inaugural event in 2018, while he and former NFL quarterback Peyton Manning then beat Mickelson and current NFL player Tom Brady in 2020.

Spieth and Thomas will compete in the PNC Championship next weekend with their respective fathers while Woods is also entered and will play with his son, Charlie. The pair finished second last year behind Team Daly.