Four runner-up finishes in 2015 might have been frustrating but the shackles are now well and truly off for 23-year old South Korean Ha Na Jang, who claimed her second title of the year in spectacular style at the HSBC Women’s Champions in Singapore. 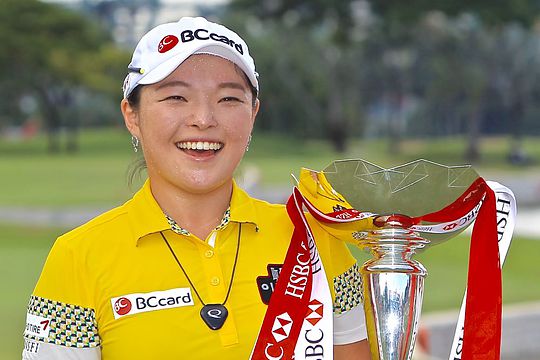 With a two-stroke lead, Jang went for the green in two on the final hole and had her heart in her mouth as the ball flew well left of her target, but managed to avoid a watery grave and come to rest just six feet from the hole.

Her final round seven-under 65 for a 19-under par total was four shots clear of Thailand’s Pornanong Phatlum and established the need for a very quick review of her 2016 season goals – having originally set her mind on achieving two wins for the year.

“Target in 2016 is two wins, but right now, I’m there, so going to change my target from two more wins, so very comfortable right now,” said Jang, who heads the LPGA’s Race to CME Globe standings ahead of Australian Open champion Haru Nomura.

Fellow Korean Amy Yang was alone in third place at 11-under with a group of five players tied for fourth at 10-under.

Former champion Karrie Webb showed some of the form she displayed at the Women’s Australian Open in Adelaide last month to rattle home on Sunday in seven-under 65 to tie for 19th place at 6-under. Minjee Lee was a stroke adrift of Webb in a tie for 24th in the limited field event.

Webb and Lee will be joined by Sarah Jane Smith, Katherine Kirk and Sarah Kemp when the LPGA resumes at the JTBC Founders Cup in Phoenix, Arizona from March 19-22.