American Andrew Landry held his nerve to win The American Express on Sunday with a two stoke victory over Mexico’s Abraham Ancer at PGA West’s Stadium Course in California.

Landry saw a six-shot lead on the back nine disappear after he bogeyed three holes straight from the 13th while Ancer, who was two groups ahead, made a string of birdies on the 14th, 16th and 17th.

With three holes still to play, Landry had then found himself tied with Ancer for the lead.

Then Landry found some form with a birdie on the 17th and on the final hole he put his approach to two metres of the pin to make another birdie and win by two shots. Landry finished at 26-under-par, while Ancer shot 63 to claim second place alone.

“That was probably the shot of the tournament for me,” said Landry about the 17th.

“Just to be able to go over there and, to that right hole location, and just hold one up and hit a good distance and have a 7-, 8-footer to look at…thankfully, it went in and kind of made 18 a little bit easier.” 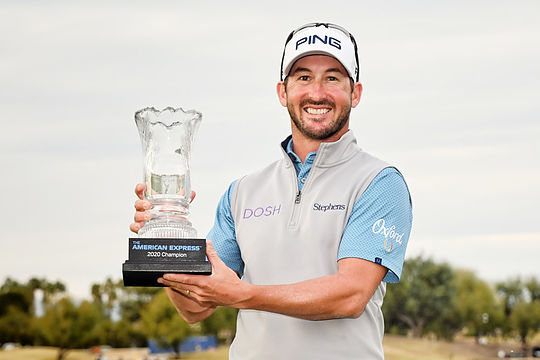 Landry entered the week having missed seven of eight cuts to begin this season and the a victory gives him his second career PGA Tour title (he also won the 2018 Valero Texas Open) and two more guaranteed years on Tour.

The difference this week was Landry’s putting – needing just 99 putts for the entire tournament. That statistic sees Landry, along with Justin Harding, Christian Bezuidenhout and Patrick Reed, as players with less than 100 putts this season, but Landry is the first to do so while winning. He had 27 in round one, 24 in round two, an impressive 21 in the third round before finishing with 27 in the final round.

What’s In The Bag – Andrew Landry

This was the second runner-up finish of Ancer’s career. He also finished second, one shot behind Patrick Reed, at last year’s The Northern Trust.

Ancer, who won the 2018 Australian Open at The Lakes, is still seeking his first PGA Tour win. He is 16th in this season’s FedExCup after finishing in the top-10 in three of his last four PGA Tour events.

Scottie Scheffler fired a closing 70 to finish third at 23-under- par. The 23-year-old former University of Texas player is in his first season on the PGA Tour after winning twice and topping the Korn Ferry Tour Finals and overall points lists last season.

Cameron Davis was the best of the Australians finishing in a share of 29th position at 14-under-par. Cameron Percy missed the cut along with Greg Chalmers, Aaron Baddeley, John Senden, and Rhein Gibson.