On Sunday, Justin Rose recorded his first win since the 2013 US Open when he claimed his sixth PGA Tour victory against Shawn Stefani on the first extra hole at the Quicken Loans National.

Rose and Stefani each shot 70 to finish at 4-under-par at Congressional Country Club on a course that played much tougher than when it hosted the US Open three years ago with firm greens and running fairways demanding precision both off the tee and from the fairways. 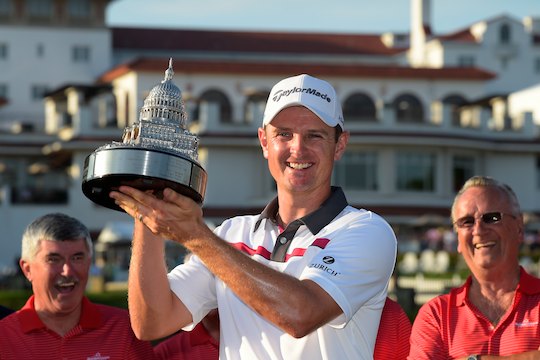 “It’s great to win on a course like this because you can’t luck into it,” said the 2013 US Open champion.

“I had to rely on different parts of my game all week. I was really pleased to see the PGA Tour set it up tough. It was fair but you had to play good strategic golf.”

“It hasn’t been lost on me that I haven’t won for a year. It’s a huge boost confidence-wise for sure going into a major championship.”

Patrick Reed was among those who failed it. Reed took a two-stroke lead into the final round and was threatening to have the last say on those who ridiculed him for having declared himself a “top-five” player in the world a few months back.

Reed imploded spectacularly, shooting a 77, which included three double bogeys and numerous dummy spits along the way. South Korean Noh Seung-Yul started the day equal second, but had a back nine meltdown, limping home in 43 strokes for a 79.

Rose and Stefani each finished at 4-under par, two of only 10 players to better par in the tournament.

Australia’s Marc Leishman led early in the fourth round before carding a 3-over 74, with rounds of 70-66-73-74 finishing in a tie for eighth place overall at 1-under to be the best of the Aussies.

Steven Bowditch fired a 1-over 72 to finish at 2-over in a tie for 21st place to be the next best Australian. Brady Watt secured a top-25 finish, the former world number one amateur recording his best PGA Tour result to date.

Fellow Western Australian Oliver Goss, who like Watt is attempting to play his way onto the main tour, made his first cut as a professional finishing in a tie for 55th position after being the 36 hole co-leader.

In his first tournament back since his back surgery in March, Tiger Woods missed the cut after shooting 74-75 and is widely expected to play at the Scottish Open next week to give himself a chance of being ready for The Open Championship.