The 20-year old tyro is now a genuine contender for the top spot in the women’s game after holding off the spirited challenge of the talented Korean Mirim Lee to prevail by three shots with a commanding 16-under par total. 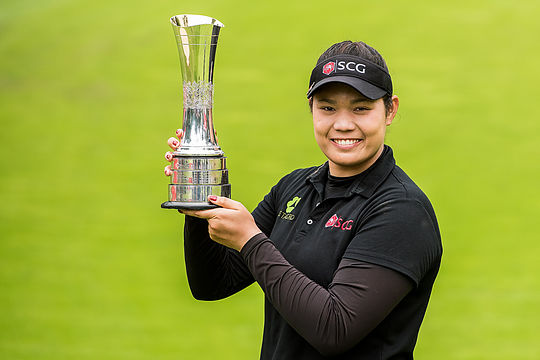 Playing without a driver or fairway metal clubs around the narrow Woburn layout this week, Jutanugarn held a two-stroke overnight lead over Lee and blew the margin out to five strokes with nine holes to play.

Things got tight when the Thai took a double bogey on the the 13th to see her lead shrink to just one, however a birdie at the 17th virtually ensured a famous victory and sweet redemption after she blew a great chance to win the season’s first major after bogeying the final three holes at the ANA Inspiration in April.

A par at the final hole set off emotional scenes with her family after her fourth but most important win of the season was sealed, having also become the first from her country to win an event on the LPGA Tour earlier this year.

“My mother cried at the end,” Jutanugarn said. “She said ‘thank you’, and that made my day.”

“For me it was hard today, I felt a little bit nervous at times. I think this victory is really important for me and Thai golf.”

“I hope I can inspire some players in Thailand.”

Lee, who opened the championship with a brilliant round of ten-under 62, shot a one-over round of 73 to tie for second place with 2014 champion Mo Martin from the U.S. at 13-under par.

Another former champion, American Stacy Lewis, was alone in fourth place at 11-under.

Playing perhaps with the shroud of pressure lifted with her bid to make the Rio Olympic Games team now at an end, Australia’s Karrie Webb had her best finish of the season at the club where she won her first British Open title many years ago.

Sarah Jane Smith was next best in a tie for 17th, Minjee Lee was a stroke further back tied for 25 while Su Oh finished well back in the field in a tie for 70th place.

Jutanugarn’s victory sees her rise to No. 3 in the world rankings and stamps her cards as a hot favourite to win gold for Thailand when the women’s Olympic golf competition kicks off in Rio in a few weeks.