Notching her first win in top company may have taken a little longer than expected, but nobody ever doubted this day would arrive.

The precociously talented Ariya Jutanugarn has finally broken through to become the first Thai winner on the LPGA Tour, with an emotional victory at the Yokohama Tire Classic in Alabama. 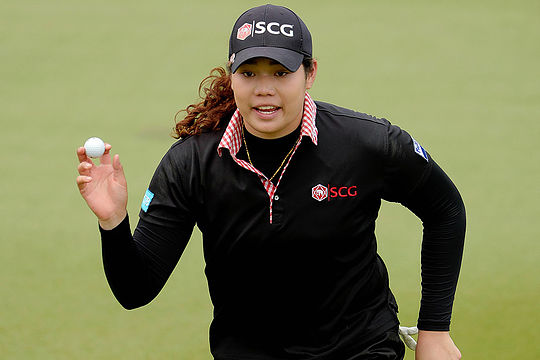 Jutanugarn held a three-stroke overnight lead but kept the nerve ends jangling all day Sunday with an up and down performance, eventually carding an even-par 72 to claim her first victory by a stroke.

“I feel like the last three holes I can’t control anything,” an emotional Jutanugarn said after the round, “My hands shake, my legs shake. I’m very proud right now.”

The 20-year-old sunk a clutch four foot putt on the final green to finish at 14-under 274 to beat home South Korea’s Amy Yang and Americans Morgan Pressel and Stacy Lewis.

Sweden’s Caroline Hedwall also made an encouraging return to form to finish in outright 5th place at 12-under.

Former world number one Lewis has now gone 49 tournaments without claiming a victory, notching 11 runner-up finishes in that span.

Jutanugarn has been close a number of times this year including at the ANA Inspiration five weeks ago, the first major of the year, where she led by two shots with three to play but bogeyed her final three holes to lose to Lydia Ko.

Casting those demons aside was an important career milestone and as well as becoming the toast of Thailand, Jutanugarn’s win was also special in that her mother was in attendance on Mother’s Day in the United States.

Her older sister by 12 months, Moriya, who also plays on the LPGA and finished in tied 63rd place in this event, was also on hand to add to the family celebrations after the round.

It was a solid week for the Australians with Minjee Lee tying for 6th place at 11-under par, while Sarah Jane Smith continued her recent good form to finish at 8-under par in a tie for 15th.

Victorian Su Oh finished down the field in T45th position, two strokes ahead of Karrie Webb in tied 57th.