Playing in the third last group, Jutanugarn closed with a final-round 63, her lowest 18-hole score since the recording a 62 at the Meijer LPGA Classic. A weather delay momentarily drew out the final day with Jutanugarn awaiting the outcome as Thitikul playing in the final group needed an eagle to win or a birdie to force a playoff. 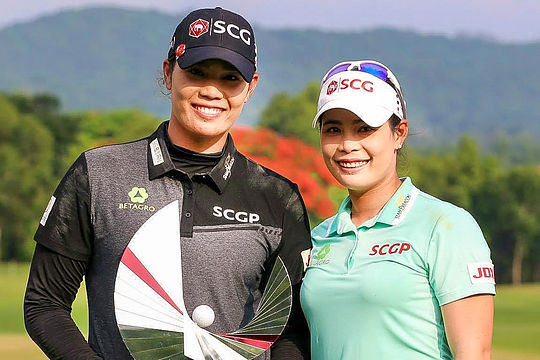 When play resumed and she finally landed her approach to the green, a three-putt on the final hole meant Jutanugarn had earned her first victory in 1,507 days.

It was Jutanugarn’s 11th LPGA title and her first since the 2019 Ladies Scottish Open. She becomes the first Thai player to win in her home country on the LPGA Tour.

“It just feels so good, not only for a Thai player to win, but I would say I have had really tough time last two years,” remarked Jutanugarn.

“I don’t know how many times I told my psychologist…I want to rest, no more. I want to stop for a while.”

“Every time when I look at all the kids and I want them to give them inspiration. So I feel like you know what, don’t give up. Do your best. Try harder. Keep trying. One day you will get it.”

Australia’s Hannah Green had another solid finish on the LPGA Tour, firing a closing 68 to tie 7th at 19-under par, a week after her second placing in Singapore, which followed a tie for third at the LA Open.

Green was obviously happy with her result and recent run of form.

“Shot 4-under today,” said Green. “Wish I could have capitalised on the last hole, but I think with a little bit of a break kind of was hard with the delay. But if you told me that I was going to come in the Top-10 at the start of the week I probably would’ve taken it. Seeing the forecast with the heat and the possible storms, I’m very happy.”

Katherine Kirk was the next best Australian in a share of 31st position, with Minjee Lee in a share of 54th position followed by Su Oh.

The LPGA Tour returns to America with the Pure Silk Championship commencing 20th May at the River Course at Kingsmill Resort in Williamsburg, VA.