Ariya Jutanugarn survived a back-nine implosion to eventually win the US Women’s Open on Sunday and claim her second career major title in a playoff.

Jutanugarn let slip a seven-shot lead with nine holes remaining before parring the fourth playoff hole to defeat South Korea’s Kim Hyo-joo to become the first player from Thailand to claim the US Open crown. She also won the Women’s British Open in 2016. 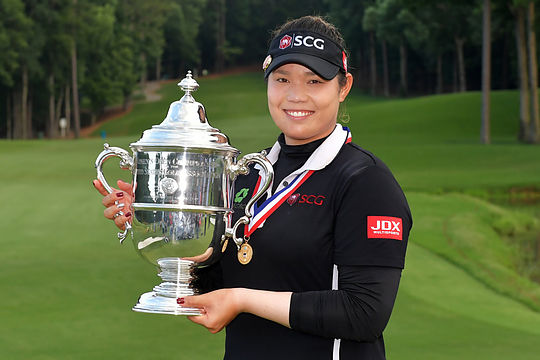 Jutanugarn finished with a one-over par 73 and a 72-hole total of 11-under-par.

“After you have a seven-shot lead and end up with you having to go to a playoff, I had no expectations,” said Ariya.

“If I have a playoff then I’m going to make sure I do my best every shot because I felt like I didn’t commit on the back nine. I felt like I had a last chance to make myself proud.”

Jutanugarn started the day with a four-shot lead over Australia’s Sarah Jane Smith and looked like she might win easily after opening with a 4-under on the front nine to stretch her lead to seven shots heading into the closing stages of the championship.

Smith had a three-shot lead going into the weekend after back-to-back 67s but finished the tournament with two straight disappointing rounds. She was in the final group with Jutanugarn but had a 78 on Sunday to finish in a tie for 5th alongside Lexi Thompson, Taiwan’s Wei-Ling Su and amateur Patty Tavanakit.

“I didn’t do a very good job of it today. I’ve got to figure out a way to putt a little better under pressure. I feel like I’m putting well. I holed a lot of really nice putts the first two days,” said Smith.

“I just got a little tentative over the weekend. I left a lot of putts short. I hit a lot of really goods shots. There was a lot of opportunities, which I think that was the disappointing part. I did give myself some chances but never gave a putt a chance.”

Smith was hunting for a first win in 222 starts on the LPGA tour since her debut in 2006.

Su Oh was the next-best Australian in a tie for 17th while Minjee Lee tied 34th.