Korean Kyung-Tae (K.T.) Kim shot a brilliant final round seven-under 65 to edge out countryman Jeunghun Wang to win the Thailand Open Championship in Pattaya on Sunday.

In an enthralling afternoon battle, the 28-year old birdied the final two holes for a 21-under par 267 total to claim victory by three strokes. 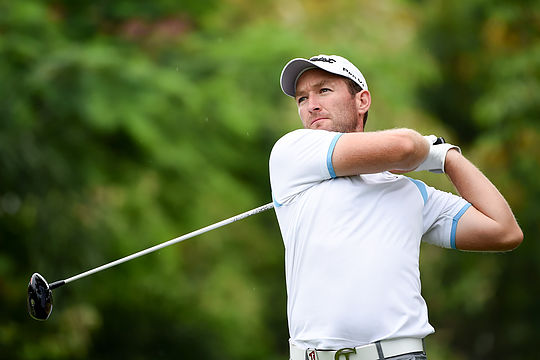 This was an emotional win for the former Japan Golf Tour Order of Merit winner and 2011 Presidents Cup representative, who has struggled since his last win in the 2012 Fujisankei Classic in Japan.

“Today I had luck with me that made me a champion,” said Kim. “The last three years I did not do well because I wanted to go to America and I thought if I had 20 more yards, I would have a chance to win over there. I changed my swing and my rhythm and it changed my results.”

“From there, I tried changing back to my usual swing but it took quite a while. Now I have a good mental image of my swing, so that is why I am doing well.”

It appeared that destiny was on Kim’s side as his approach to the 433 yard final hole flirted with the drop off into a deep swale at the left edge of the green, before feeding down to within birdie range.

Not to be outdone, Wang responded with an approach that finished inside Kim’s before their playing partner, Josh Younger from Australia, bettered Wang’s approach to complete a hat trick of birdies for the final group.

19-year old Wang, who was a runaway 10-shot winner in an event on the inaugural PGA TOUR China Series last year, was highly impressive in challenging the more experienced Kim right to the line.

“I would say this has been the highlight of my golf career so far,” Wang said, “I will be back to try and win the Thailand Open. I have no regrets, I tried my best and did my best.”

31-year old Younger held the overnight lead at 15-under but the leaders swept by him on the final day with rounds of 65 and 67 respectively.

Younger began the final round brilliantly with a birdie on the 1st hole but struggled to keep pace with the leaders through the middle of the round.

The day ended well for the Victorian however as he clinched outright third place at 14-under, and a US$70,000 payday, with his final hole birdie.