Japan’s Tsubasa Kajitani shot an even-par 72 to defeat Emilia Migliaccio on the first hole of a sudden-death playoff to win the Augusta National Women’s Amateur. 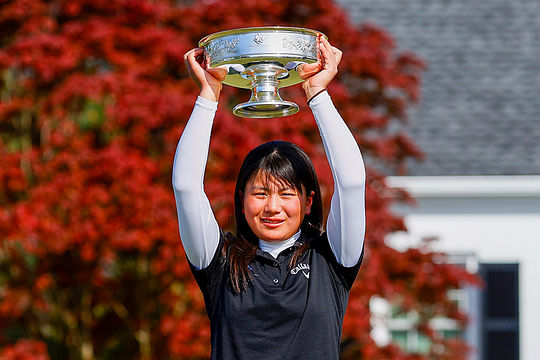 Kajitani, ranked No. 26 in the WAGR, entered the final round tied for fifth place and moved steadily through the field to finish with a total of 1-over-par along with Migliaccio to force a play-off on the famed 18th Augusta hole.

Migliaccio hit her second shot right of the right-greenside bunker. Her third found the bunker and she was not able to get up and down, finishing with a bogey 5, while Kajitani deftly two-putted from 30 metres for par and the win.

Kajitani was one of the few in the final-round field who doesn’t attend college in the US and she hasn’t played much in America, sticking mostly to pro and amateur events in Australasia.

Hailing from Okayama, Japan, Kajitani did not play in the inaugural women’s amateur event in 2019 at Augusta National, although she won the Japan Junior Championship that year. She was second at the 2019 Australian Women’s Amateur and played in three other events on the LPGA of Japan Tour.

Grace Kim, the only Australian in the field, missed the cut after opening rounds of 75-80.

While the tournament was canceled last year because of the coronavirus pandemic, this year’s edition proved, like so many of the Masters tournaments, that Augusta National is often the setting for drama and great finishes.