The WA Goldfields PGA Championship and the John Hughes Geely Nexus Risk Services WA Open Championship will sit either side of this year’s Perth International, ensuring Western Australia will be promoted as a premiere golf destination. 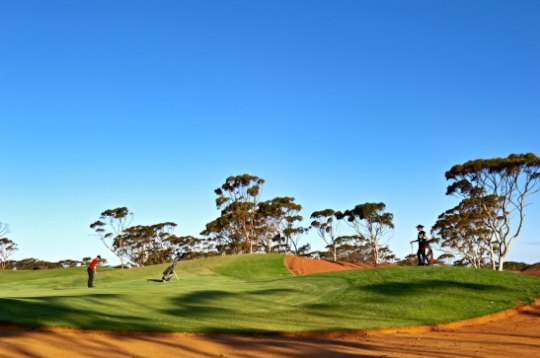 “Western Australia has consistently played an important role on the PGA Tour of Australasia, with the state home to many Australian golf champions and some of our best courses,” said Brian Thorburn, CEO of the PGA.

“We look forward to yet another chapter of this history, this time at Kalgoorlie and Royal Perth.”

As the new name suggests, for the first time the WA Goldfields PGA Championship will be played at Kalgoorlie Golf Course from 11-14 October 2012.

Kalgoorlie Golf Course is a premiere Graham Marsh designed layout, and is famous for having two of its holes included as part of the Nullabor Links, the world’s longest golf course.

With the support of the City of Kalgoorlie-Boulder, the $110,000 tournament is set to be a highlight on the Goldfields calendar.

“We look forward to showcasing our region through the WA Goldfields PGA Championship and welcoming Peter, and of course all the competing Professionals, to Kalgoorlie-Boulder for this great tournament.”

The Western Australian PGA Championship is also proudly supported by the West Australian State Government through Eventscorp’s Regional Events Scheme, which is jointly funded by Royalties for Regions.

With a history dating back to 1895, Royal Perth Golf Club is the oldest golf club in metropolitan Western Australia and last hosted the WA Open Championship in 1998 when it was won by Tim Elliot.

“Royal Perth has made a fine contribution to golf in WA and Australia,” said Gary Thomas, Chief Executive of GolfWA.

“Apart from hosting numerous championships, Royal Perth has also produced many of golf’s senior administrators. History also shows the club has consistently produced many top golfers who have represented the sport with distinction such as Terry Gale, Stephen Leaney and Brett Rumford, and GolfWA is delighted that Royal Perth is the host club for this year’s Championship.”