Danielle Kang celebrated her 27th birthday in style on Sunday by successfully defending her Buick LPGA Shanghai title with a one shot victory at Qizhong Garden Golf Club.

The American, who started the day a shot off the lead at the China LPGA-US LPGA Tour co-sanctioned event, closed with a round of 70 for a 72-hole score of 16-under 272. Kang’s third LPGA title earned the San Francisco native US$315,000. 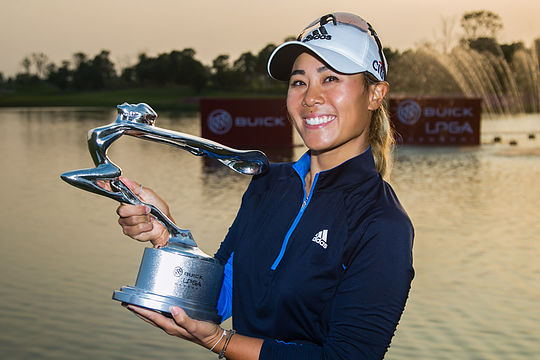 Overnight leader Jessica Korda was runner-up as the American struggled to an even-par 72 in a round that saw her three birdies off-set by three bogeys. China’s Liu Yu (65) was equal third with Japanese Nasa Hataoka (68) and American Kirsten Gillman (68) at three shots back.

Kang said she had come back to Shanghai “wanting to win” but “never felt safe” in her bid to repeat as champion until the last putt dropped. She called ball striking the “forte of her game” and her “short game showed up” today.

“It was a really stressful day. I definitely played well out there. It was really tough because you’re definitely watching what Jessica is shooting and scoring, and always just try to keep in my own game,” she said.

“There were a lot of birdie opportunities. I made some really great up and downs. I’ve never been more nervous than the last putt for some reason, but I made it.”

Korda, daughter of Czech tennis great Petr Korda, lamented how she couldn’t get “anything going” in the hunt for her sixth LPGA Tour title.

“Everything was half shots. I was either short or I was long. It was just one of those days where it just wasn’t meant to be, I guess,” said the 26-year-old Florida native.

“But if you were going to tell me at the start of the week I would’ve come out finishing second, play in the final group, and had the week I did, I would’ve probably taken it. But this one definitely sucks.”

Katherine Kirk and Su Oh were the best of the Aussies in a tie for 38th place at 2-over while Min Jee Lee closed her tournament in a share of 50th place at 4-over.

The LPGA now heads to Busan, Korea for the inaugural $2,000,000 BMW Ladies Championship.