South Korea’s Sung Kang fired seven birdies in a four-under par 67 on Sunday to claim his first PGA Tour victory with a two-shot win over Matt Every and Scott Piercy at the AT&T Byron Nelson in Dallas, Texas.

Kang, who is based in Texas, equalled the Trinity Forest course record with a bogey-free 10-under 61 on Friday, finished with a 23-under par total.

Kang had earlier strung together three straight birdies at eight, nine and ten but was unable to get up and down from a green side bunker at the 12th.

He clawed his way back after reeling off another trio of birdies at 14, 15 and 16 to move to 24-under for the tournament.

On the 18th he was three strokes ahead and despite a closing bogey, it was enough to secure his maiden victory on the PGA Tour after 159 starts.

“Yesterday we finished too late. I didn’t have time to sleep much, only slept about three hours. I just wanted to be chill and having some fun and then when my turn came just try to really focus in – and it worked out great.”

Kang started the third round with a four-stroke lead, but trailed Every by one when play was stopped midway through that round Saturday night. When they resumed Sunday morning, Kang regained the lead with three birdies on the back nine, while Every buckled under the pressure with four consecutive bogeys. 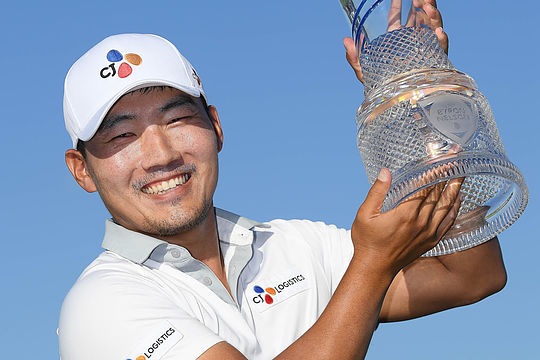 A third-round 68 put Kang at 19 under, three strokes ahead of Every going into the fourth round.

Kang’s win moved him up to 13th on the International Team standings for December’s Presidents Cup. For the first time, the team selection criteria is based on points within a 12-month period, not just world ranking position which may open the door for Kang to be at Royal Melbourne later in the year.

Kang also became the 10th Korean-born player to win on the PGA Tour and the second Korean-born winner of the AT&T Byron Nelson after Sangmoon Bae won in 2013. He moves from 71st to 21st in the FedExCup standings.

Brooks Koepka finished fourth at 20-under after a 68 to head to the PGA with plenty of confidence after shooting four rounds in the 60′s.

Matt Jones was the best of the Australians finishing in a share of 5th position at 17-under to pocket a tidy US$267,810 and move to 89th in the FedEx standings.

The result marks the 87th start since Jones had his last top-10 finish on the PGA Tour, which came at the 2015 Dell Technologies Championship.

Cameron Davis broke a streak of five consecutive missed cuts with a T35 finish at 10-under par, with Curtis Luck in his tournament debut making the cut for the ninth time in sixteen starts finishing in a share of 43rd position.