American Danielle Kang has started her 2022 season in dramatic fashion carding five birdies in a seven hole stretch to secure the LPGA Tournament of Champions for her sixth LPGA Tour title and first since August 2020.

Kang was T2 entering the day, a shot behind World No. 1 Nelly Korda but Korda started slowly and made bogey on the par 3 fourth and was never able to recover to finish with a 75 and in a tie for fourth.

In contrast Kang was 1-under through 10 holes in her final round before making her move. She posted a birdie on the 11th hole, made par at 12 and then knocked down three straight birdies to move to 17-under par. Even a bogey on 16 did not hurt as the 29-year-old finished off the win. 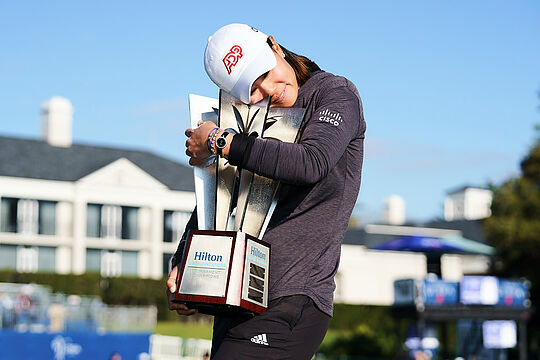 “My mental game was really good,” said Kang. “I had a really good attitude all day today and yesterday. I know I left some putts out there, but I never let it get to me and I kept having to give myself birdie chances as much as possible.”

Kang earned her first LPGA Tour win at the 2017 KPMG Women’s PGA Championship, in her 144th LPGA Tour start. In October 2018, Kang won again at the inaugural Buick LPGA Shanghai tournament by two strokes to earn her second career victory. As an amateur she won the 2010 and 2011 US Women’s Amateur Championship.

To date her career earnings total just over US$7 million.

The LPGA Tour next moves to the Gainbridge LPGA at Boca Rio in Florida which sees Aussie Karrie Webb playing along with Su Oh, who is fresh off her recent win at the Australian WPGA Championship at Royal Queensland.