Queensland’s Karis Davidson has broken through to win her first Australian Girl’s Amateur title with a one stroke victory over New Zealand’s Momoka Kobori at Devonport Golf Club in Tasmania.

Davidson finished the tournament with a 22-under-par total following rounds of 70-67-68-69, on a layout which was receptive to low scoring all week. 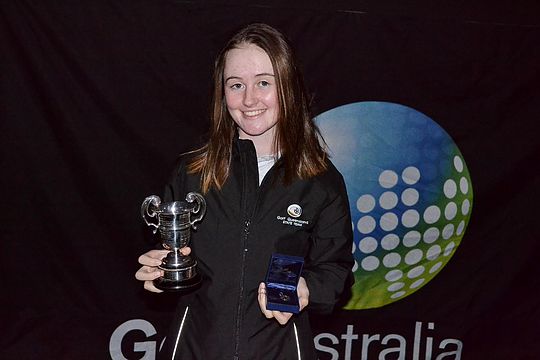 Davidson, 17, was beaten by a shot by Melbourne’s Konomi Matsumoto at Yering Meadows in 2014, then was denied victory by Celina Yuan’s birdie on the last at Tea Tree Gully last year where the Sydneysider prevailed in a three-hole playoff.

“I kept playing the course and just wanted to make the best score I could instead of playing against the other girls,” said Davidson, also the winner of the recent West Australian Amateur Championship.

“I was a little bit nervous, (especially after) the previous years were so close, but I held it together and finished well.”

In stark contrast to the scoring in the Boy’s championship, twenty-two players finished under-par for the tournament.

To the victor go the spoils with Davidson receiving a Karrie Webb Series scholarship as well as a berth in the 2017 Women’s Australian Open field at Royal Adelaide. Davidson joins former champions including Whitney Hillier, Sarah Kemp, and Tamie Durdin.