Kaymer had led by three shots on 21 under at one point but he collapsed on the back nine before a birdie on the 16th got him back level with Karlberg, who had crept through the field with a 67 at 19 under. 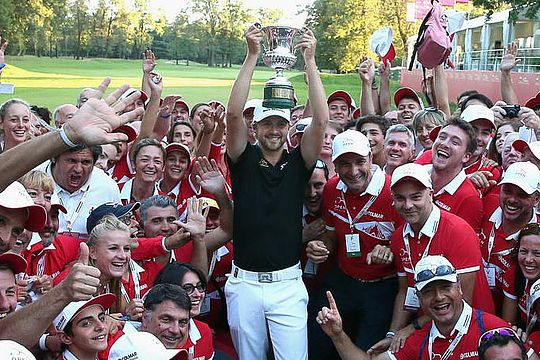 Both men had parred the 18th all week and they did so again on the first play-off hole but then there were gasps from the crowd when Kaymer missed his birdie putt second time around.

Karlberg then had the crowd applauding wildly when he rolled in his birdie putt to claim his first European Tour title in his 89th event.

“I thought I had a good chance this week because I have been playing very well lately but then when we were getting near to the end of the round I didn’t think I had done enough,” he said.

“But then I managed the birdies at 16 and 17 which was good enough to get into the play-off. Then to go on and win against a player as good as Martin Kaymer in sudden death makes it very special.”

Australia’s Jason Scrivener continued a stellar run of recent form with his fourth top 20 finish in his last five starts. The Western Australian closed with rounds of 68-68-67-70 to sit in equal 14th place and just four shots from a spot in the playoff.

“I have learned a lot this first year on Tour not just on the golf course but getting used to a new life style travelling the world, staying in out of hotels and managing yourself, so it’s all very much a steep learning curve this first year,” he said.

“And getting familiar with this change in my life is starting to reflect in my performances and while I have not been playing fantastic, I have been making cuts and that always helps.”

“Of course, the big goal is to try and secure my Tour card for next year and avoid having to go back to the Tour School but I have not been trying to think about it too much because if I were to secure conditional status for 2016 then I would be happy.”

“So from where I was a few weeks ago on the Race to Dubai to where I am now anything is fine with me.”

Wade Ormsby was the only other Australian to make the cut with a third round 74 the only blemish on an otherwise solid week. The South Australian sits at 90th on the Race To Dubai.