Ricky Kato fired opening rounds 67-65 to be four shots ahead of Brady Watt at the Tasmanian Open at Country Club Tasmania.

Kato began the second round with a one stroke lead over John Cassidy, Geoff Drakeford and Watt, with the day’s low second round 65 widening his advantage in this National Trial event. 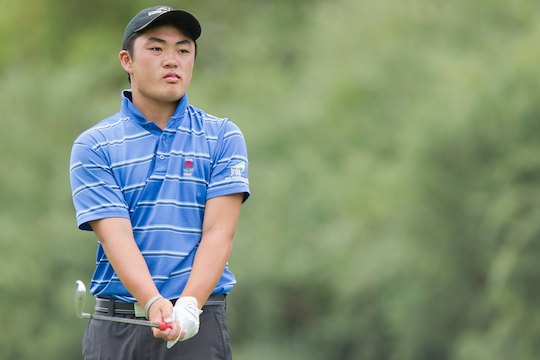 Ricky Kato is at 10-under-par and four strokes ahead of his nearest rival at the Tasmanian Open (Photo: Anthony Powter)

Just eight players broke 70 during the second round with scores in the mid-70′s common place.

Drakeford fired rounds of 68-70 to be a 4-under-par in 3rd position, a stroke ahead of Daniel Bringolf, Brett Drewitt and Andrew Philips.

Kato is in search of his first National Selection title having recently progressed from the junior ranks.

Based out of Cammeray Golf Club in Sydney and playing the top-order position for Bonnie Doon in the Sydney Major Pennant series, Kato won the 2011 Harvey Norman Junior and Srixon Internationals titles.

With selection into the National Junior squad coming in 2012, along with Oliver Goss and Anthony Murdaca, this season Kato has secured top-15 finishes at the recent Lake Macquarie and NSW Amateur and emerged as another young-gun to watch.

Kato also progressed to the quarter-finals at the Australian Amateur, only to have his run cut short by eventual winner, Germany’s Marcel Schneider.

The cut came in at 12-over-par with Tasmania’s Ryan McCarthy at 2-under-par in a tie for 7th position along with Rory Bourke.