Kay fires record low to lead Master of the Amateurs

Becky Kay has started her Australian Master of the Amateurs campaign in style firing a women’s amateur course record equalling 3-under 69 on the West Course to take a stroke lead over fellow Australian, Stephane Kyriacou, following the first round at The Royal Melbourne Golf Club.

Kay began her round with a bogey but was able to gain momentum with a birdie on the second before ending the front nine with a 1-under 35. A bogey-free back nine including two birdies saw the Queenslander come in with 34 after a birdie on the 18th. 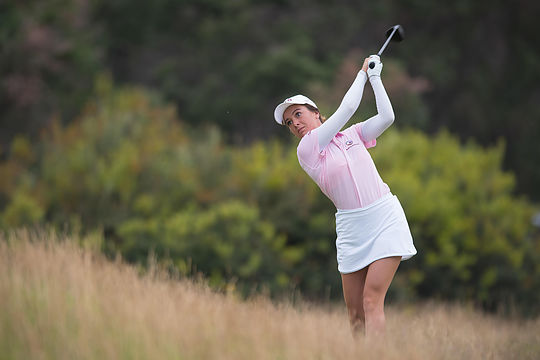 “I started off a bit slow with a bogey but just kept it going,” said Kay, who won the Riversdale Cup last year.

“Really – an equal course record – I did not know that. But to record that here at Royal Melbourne and get your name on the board is special.”

Despite the sizzling opening round, Kay remains coy about her standing.

“It’s only the first round, yet I’m glad to be off to such a great start. There are three more rounds and anything is probable, but to be where I am, I’m happy.”

Kyriacou was also equally impressive with her 2-under opening round 70 that included four birdies and two bogeys. Sitting one behind Kay sees the St Michael’s and The Lakes member from Sydney right in the mix, along with Julienne Soo, who sits at 1-under.

Amy Chu and Grace Kim round out the top-5 after the opening round.

Defending women’s champion, Yuka Yasuda, opened with a 6-over-par 78 to be nine off the pace and in need of a low round tomorrow.

In the men’s event, Japan’s Keita Nakajima takes a one stroke lead over American Matthew Wolff following an opening round of 6-under 66. Aussie Andre Lautee sits in third position at 4-under.

Defending champion David Micheluzzi is at 1-under and in a tie for 13th to be five behind the leader following a mixed round. Micheluzzi’s card include five birdies which were negated by four bogeys as he struggled to gain momentum on the first day.

Scoring in the afternoon proved challenging as southerly winds lashed the famed West Course at The Royal Melbourne Golf Club.

Justin Warren, an afternoon player, nailed a hole-in-one on the 5th before firing a 69 to be in a share of 5th position. Warren will enjoy an early tee time tomorrow and is sure to take full advantage of the conditions.

World number 1 ranked amateur Justin Suh opened with a two-over-par 74 to be in 31st position, eight strokes behind the leader.