Queensland’s Becky Kay only managed to par her last six holes but she had done enough damage in her opening 12 to snatch the outright lead on the opening day of the second Women’s Amateur Asia-Pacific championship (WAAP) after a sensational eight-under-par 64 round.

On Thursday at The Royal Golf Club in Japan, Kay’s bogey-free round was the lowest in the history of the championship, bettering the six-under-par 65 effort of the reigning champion Atthaya Thitikul of Thailand in the first round in Singapore last year. 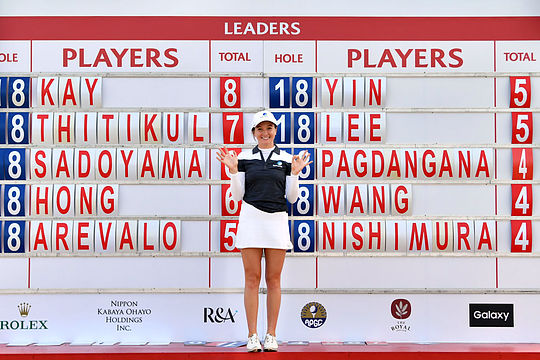 The world No.9 was also bogey-free for her opening round and finished one shot behind the leader at seven-under par 65.

Riri Sadoyama, from the host nation Japan, hit the first shot of the championship and came home in 66, tied for the third place alongside Korea’s Yae-Eun Hong.

On a difficult golf course, playing slightly easier because of the receptive greens following the overnight rain, as many as 45 players shot par or better.

It was Kay who made the most of the conditions, including a run of seven birdies in nine holes from the 13th onwards after starting at the 10th tee.

“I got off to a good start with a birdie and I guess I just kept it rolling. The putts that I needed to make, I made and I hit it close. I just played golf, that’s what I did. I’m really stoked,” said Kay, who continues her fine form having won twice in her last four starts in Australia.

“I just wanted to make more birdies. I finished with four birdies on the back nine (her front nine), and I had two early ones on and six pars to finish. I had the opportunities to have more birdies but I’m not complaining.”

Grace Kim was the next of the Australians finishing in equal 12th with an opening round of 70 while Julienne Soo, Maddison Hinson-Tolchard and Doey Choi were another two shots back in a tie for 33rd place.

2019 Master of the Amateurs winner, Stephanie Kyriacou, is 46th.

The Championship has an ‘Elite’ status in the women’s World Amateur Golf Ranking (WAGR). The field is 80 players from 19 countries and includes 17 ranked inside the top-100 of the WAGR. The champion will earn a spot in two of the five women’s majors – the AIG Women’s British Open and the Evian Championship. She will also receive an invite to the 2020 Augusta National Women’s Amateur.