Kaymer closes out wire-to-wire win at US Open

Germany’s Martin Kaymer claimed his second major title winning the US Open when he fired a closing one-under 69 to win the title by eight shots over American’s Rickie Fowler and Erik Compton at Pinehurst No 2 course in North Carolina.

Kaymer, winner of the 2010 PGA Championship, set up his second major title with an opening 65 for a wire-to-wire victory for just the eighth time in US Open history. 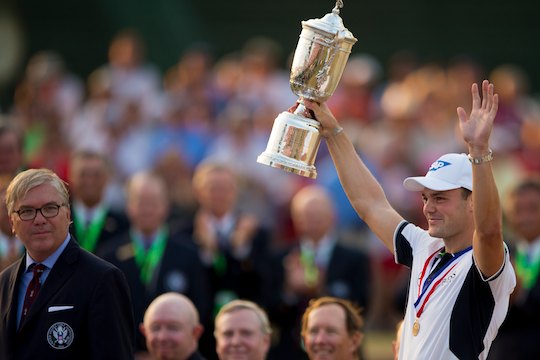 Martin Kaymer holds up the US Open trophy during the presentation ceremony (Credit: USGA/Steven Gibbons)

With a 5-shot lead heading into the final round Kaymer didn’t let anyone get closer than four en-route to the title. Kaymer put on a sizzling display of golf with crisp iron play and precision driving all week on a course where the majority of the field struggled.

“Overall it was a nice week and a very nice day,” said Kaymer.

“I played very well the first two days to give myself a cushion, then I held it together (Saturday) and that gave me a nice cushion for today.”

Kaymer took command early in the tournament, leading by three strokes after the first round, six shots at the midway point and five shots at the completion of 54 holes. His consecutive rounds of 65 set the US Open record for lowest score over the opening two rounds.

“I didn’t make many mistakes,” Kaymer said. “I played very solid the first two days and it gave me a nice cushion. The challenge was to keep on. Your body tells you you should take it easy and I overcame it.”

Jason Day and Adam Scott were the best of the Australians securing another top-10 finish in a major with Day in a tie for 4th and Scott recording his best result at a US Open with a T9.

“It’s a step in the right direction,” said Scott who shot a final-round 69 to end his week 2-over to retain his number one world ranking.

“I felt like my game really came into a good spot today, so it would have been nice to have started the day under par and try to make something happen. But you know, it was just a few too many errors throughout the first three rounds.”

Scott heads to Europe this week on vacation and then onto Hoylake a few days early to prepare for the year’s third major, The Open Championship starting 13 July.