When Martin Kaymer tapped in for a 71 and a one-shot victory on 13-under from Jim Furyk, his smile shone through the gloom of the course at TPC Sawgrass.

Earlier in the morning Kaymer appeared unstoppable with 10 pars and 3 birdies to have him three clear before a 90-minute storm delay halted play. The closing holes would prove otherwise as nerves played the better part of Kaymer’s game. 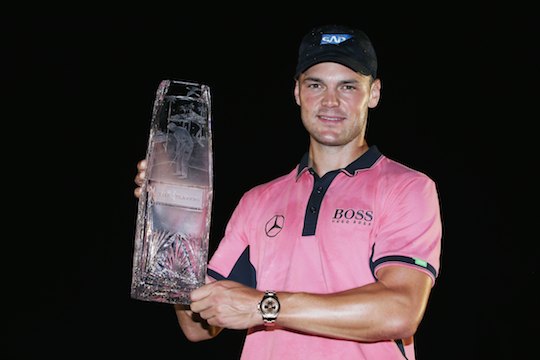 When play resumed as darkness descended on the course, Kaymer looked nothing like the machine he was before the delay, making a double-bogey on the 15th to see his lead fall to one.

After a par on the 16th, he nearly spun his tee shot off the island green on the 17th, the ball stopping less than a foot from ruin.

On the 18th, Kaymer hit a solid drive but left his approach short of the green. A two-putt from 42 feet gave him his first win since 2012. Furyk, who shot a 66 that day, came up just short of winning his first Players in 19 attempts.

Kaymer, who fell to 63rd in the world, was winless on the PGA Tour in 2012 and 2013, and didn’t have a top-10 heading in The Players Championship at TPC Sawgrass. Yet this week he was able to turn his game around.

“The belief is always there. I knew I could win a golf tournament again,” said Kaymer.

“It was a shame we had to stop playing. It is always difficult to come back after a little break. I was really disappointed when they called it. I was playing so well.”

“So I made a couple mistakes coming in. I need to admit that. But knowing this and already reflecting on it, probably it will help me in the future.”

In third position at 11-under came Sergio García after 70, while in a tie for fourth at 10-under was Jordan Spieth and Justin Rose.

It was a harsh learning experience for Spieth, who shared the overnight lead. The 20-year-old American finally made a bogey on the 59th hole and in the next 10 holes, four more appeared on his card.

Rose’s championship was full of controversy after rules officials penalised the Englishman for moving a ball at address.

Before he teed off in a final round in which he shot a 69, the Englishman was handed back two shots taken off him by rules officials the previous evening. Rose would have every right to be furious with the officials with their error.

Decision 18-4 came into affect this year and it basically states that players will not be penalised if slow-motion, HD replays show that their ball has moved but that the ‘movement was not reasonably discernible to the naked eye at the time’. That is exactly what happened to Rose.

Matt Jones was the best of the Aussies in a share of 17th position at 6-under, one ahead of Marc Leishman.

Tiger Woods still remains world number one, as Adam Scott failed to achieve the top-16 he required by finishing outside the top 30 on 1-over following a final round 73.