Rickie Fowler proved how well he can play under pressure shooting a 3-under par 67 on Saturday at the US Open to move into a tie for second, five shots behind tournament leader Germany’s Martin Kaymer.

With Germany’s Martin Kaymer firing opening rounds of 65 backed up by a steady 72 today, this US Open has been all about who might catch the rampaging former world number one. 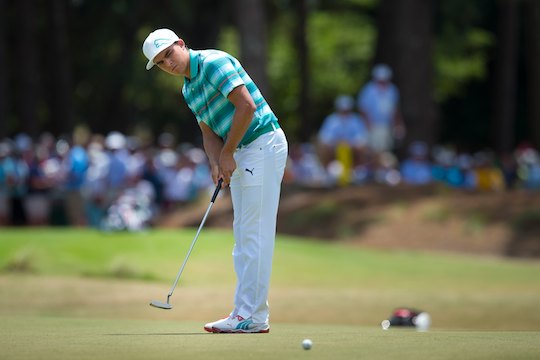 Saturday’s scoring average at Pinehurst was a brutal 5-over 75 and the 25-year-old Fowler has now played his way into a final Sunday pairing at a major.

Kaymer, the 2014 Players Championship, is the only one to break 67 this week and equalled the largest lead in US Open history after 36 holes, matching the marks set by Tiger Woods in 2000 and Rory McIlroy in 2011.

Fowler used five birdies and just two bogeys to get in the clubhouse with the championship lead late on Saturday afternoon before Kaymer rolled in his third round 72.

“I’m very, very pleased with today’s work,” said Fowler who is aiming for his second-straight top-10 finish at a US Open.

“It’s been a tough year so far for me, I’ve been a bit up and down in some cuts, but it’s definitely the best my game has been, and it’s only going to keep getting better from here.”

Either way Saturday’s 67 has presented Fowler with an outside chance to win his first major and second PGA Tour victory. Despite missing seven cuts in 18 starts, Fowler always remains the optimist.

“My main goals were to be ready for the majors,” says Fowler.

“So I put myself in that position at Augusta and I’ve done that this week. So I would definitely be very happy at the end of the year if I was in contention at all four Majors. I’m happy to be under par. It was a grind out there today.”