Starting two strokes ahead of Kemp, Keating played solid golf over the front nine to maintain her lead at the turn. Kemp set the clubhouse lead with a two-under par round of 70 but a clutch tee shot to the par-3 eighteenth hole would ensure victory would be Keating’s. 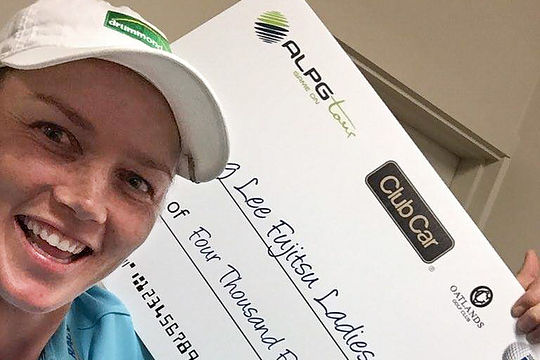 The Victorian, who also won the Anita Boon Pro-Am in Auckland last November, paid tribute to Bing Lee and the Lee family for their support of the ALPG and this event.

“I played with Yenda yesterday and we had such a great time. The ALPG has been coming to Oatlands for ten years now and the level of support that Yenda and Lionel have given the ALPG and this event is incredible,” she said.

The two-time Ladies European Tour winner also thanked to caddy/fiance Darren for his support and also her coach Darren Cole, with whom she has been working for over a year.

“Coley and I made a few changes last year and they have taken a little bit of time to bed in. Last year, the golf was a little up and down but the good was good enough for me to know that we were working on the right things. I have had to be patient which is not easy for me!”

Keating earned $4500 for the win and now sits atop the ALPG’s 2015/16 Order of Merit ahead of the next two events on the schedule in the week ahead – the Mulpha Castle Hill ALPG Pro-Am and the Gold Key Financial Ladies Pro-am at Pennant Hills.