Three weeks ago, Victorian Stacey Keating’s only professional victory was a one round Pro-Am at Port Kembla Golf Club in Wollongong after returning home from a promising rookie year on the Ladies European Tour in 2011.

Today, the former Australian Amateur champion is a multiple LET winner after triumphing in con- secutive tournaments in Tenerife, Spain and at the Lacoste Ladies Open de France at Chantaco Golf Club on Sunday. 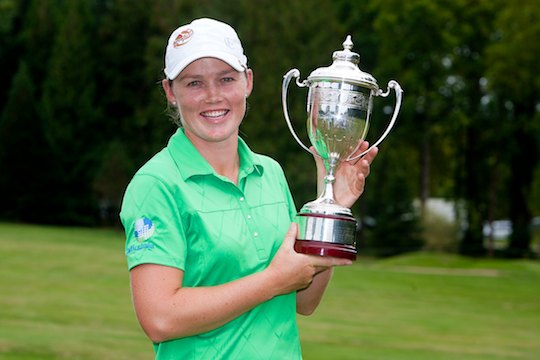 Keating came from three shots behind overnight leader Diana Luna, starting with four birdies in a row from the second hole to catch Luna.

As she did with Germany’s Caroline Masson in Tenerife two weeks ago, Keating staged a see-sawing battle with Luna for the remainder of the day as they threw birdies at each other before allowing each other back in the mix with dropped shots.

Keating birdied 14, 16 and 17 to move one ahead before bogeying the 18th however, Luna also made bogey after missing a five foot par putt which would have forced a play-off.

Keating’s final round six under par 64 left her at 14 under, one shot clear of Luna and three clear of Hannah Jun of the United States and Spain’s Azahara Munoz in third place.

And to make the victory even more sweet, she had the honour of having victorious European Ryder Cup Captain Jose Maria Olazabal and former women’s world number one Lorena Ochoa present at the trophy presentation ceremony.

“Ten years ago my dream was to meet Lorena Ochoa so standing here is unbelievable, so

thank you to Lorena for playing in this event,” said Keating. “I think Europe’s win in the Ryder Cup also deserves a round of applause!”

Keating’s second victory has well and truly erased the disappointment of being disqualified from the Ricoh Women’s British Open a month ago, after signing for an incorrect score.

“After the disappointment of the British I was really low in confidence, but obviously not now, so I’m very happy. I’ve been playing well leading up to the British as well so it was just how I was going to handle it mentally as well I guess,” Keating said.

Ochoa, making a rare appearance from retirement after starting a family, finished in a high creditable tie for 22nd place at one under par.

“I am happy. It was really a good week. I did make a few mistakes and had trouble a little bit on the greens.” she said.

“I was frustrated today, you know, I have to say that, but at the same time, I need to be happy. I am here just to enjoy it. This is more like an exhibition for me.”