The 26 year old Victorian in her second season on the Ladies European Tour holed a short birdie putt on the 452-metre par five 18th, after tying with Germany’s Caroline Masson at 9 under par in regulation play. 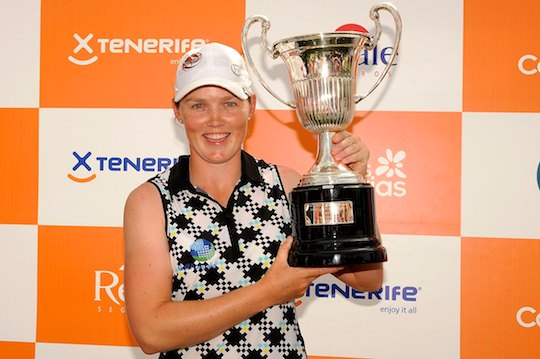 “It was a tough day out there and Caroline and I both played well. It was nice to take it to a play-off and then get over the line,” said Keating.

Keating closed with a two under par 70 to come from a stroke behind Masson but it was a close final round duel in hot and windy conditions.

The lead was exchanged several times before Masson made a mistake in the play-off by hitting her second shot into a water hazard. Her third came up short in the rough while Keating hit a superb approach shot to five feet short of the flag.

“All day it was very close and Caroline holed some putts when she needed to so it was nice and it’s always nice to birdie the play-off hole,” said Keating, who bounced back in the best way possible from the disappointment of being disqualified in last week’s Women’s British Open at Royal Liverpool.

“I’ve probably had the worst week of my life and the best week of my life in two weeks. It was very disappointing last week but this makes up for it, I can tell you. It will be all forgotten, last week,” she said, paying tribute to her caddie and boyfriend, Darren Peters, and her mentor, Karrie Webb.

Keating earned €52,500 for the win with the midway leader and 2007 champion, NSW’s Nikki Garrett, two strokes adrift in 4th place at 7 under par.